review about the game dota 2

hi all
dota 2 is an epic strategy game with 3D design and also a steam game, every match in dota 2 is taking 40 mins - 2 hours but it worth playing it . there are many heroes you can choose and test its all up to your strategy and skills to see if you can win the game :D. also you will need a good team and a good team work . good luck on this game , dota 2 is like league of legends and world of warcraft so people who played them can easily play dota 2 too. the game is about 20 gigabytes without compression and 8-9 gigabyte with compression. you can get this game from steam app and play. Note:always listen to your team mates when ganking or selecting hero its better if you dont know what to pick and where to play. the game map have 3 sides: top lane, mid lane, and bottom lane.
good luck and have fun. 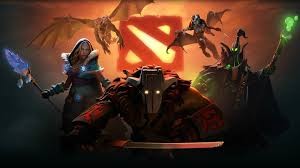 Door dit spel te spelen kun jij ontvangen: 100 Speel
for people who are begginer and looking for an easy hero u suggest ursa and axe also dont forget to use q,w,e and r.
heroes are different by they're skills, for example shadow shaman and witch doctor are support heroes but dragon knight is tank.
as ursa you have 3 usable abilities and 1 automatic ability.
first ability is earth shock, earth shock first applies the debuff, then the damage.
second ability is overpower, your attack speed gets pretty high and you can rapidly attack. per every upgrade you get more times to attack rapidly.
third ability is fury swipes, on each attack fury swipes first adds 1 stack and then deals damage based on the stack count this means that the bonus damage is applied even with the first attack. the damage is dealt in one instance together with ursa's attack damage.
and last ability which can be called ult is called Enrage. enrage gives quite good movement speed and attack speed for beating them up.

100 Speel
every time you kill an opponent you get gold , you can get gold from runes and last hit too and use f4 to open shop and buy some items to get power.
also don't forget to buy courier if you're gonna use a support hero ((also plant wards they're most important in late games))
as ursa you need starting items that are :tango, scout shield and iron branch. after a while you will need to get new items. i suggest boots of speed and morbid mask as your first items.
then you can upgrade them to phase boot and vladmir's offering . in the late game you can but heart of tarrasque and tank into battle . easy rampage and win.
so i guess you all understand what kind of strategies you have to use to trick people and kill them. Hint: talent tree is having 2 sides , one of them are for attack and one of them are for defence.
691 0 Facebook (Deel)
5.0 (1)