Recently I got an interest for indie games and casual stuff. Remember those games you were playing when you were little? For example, I was playing a ton of Miniclip games but from those times I remember one big game studio/publisher: Bigfish Games. You won’t find many “WOW” mechanics in those kind of games, but the artwork in general is amazing and they are doing a good job in relaxing you.
In honor of those moments I decided to play some more BigFish games and I started in alphabetical order. Today I’ll review 1 Penguin 100 Cases. Let’s start firstly with the name: absolutely no idea what they were thinking of. The game is based on a penguin that just came from the egg and you’ll help him discover himself. The point of “100 cases” in the title: still haven’t got the idea why (random.org I presume). 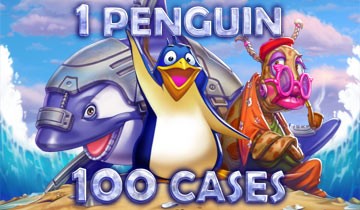 PROs
- Many different mini-games.
- Lots of different artwork styles.
- It can be challenging sometimes.
- The starting was really good. It kept me interested and I was excited to see what’s coming.
- There’s even a story that a kid probably will get it.

CONs
- The mini-games were becoming repetitive and all the levels were basically the same, the only thing that was different was the artwork.
- Some bugs here and there: at the puzzle stages some pieces will get stuck in certain places and you need to restart the game and wish none or a proper piece will get stuck and it won’t be necessary to move it.
- Some levels are easy and some are too hard. When you need to find hidden objects it can become really frustrating because some of them are put in random places.
- There’s almost a necessity to use hints which is a practice I don’t like in games; they should encourage hard work and patience.
- For a game intended for kids it’s too hard.
- If you’re not a kid you’ll find the story of the penguin lame and with plot holes. How could he get trapped/lost? Opinions
The game started great, but slowly became worse and worse. At the end I got the impression that the game was made in 5 minutes, I was disoriented and I had no idea why I needed to do those things. There was a huge plot in the story; how the penguin got trapped. The developers are lucky that hidden object games don’t necessary need a story. What I hated most was the repetitive objective layout they kept: meet new NPCs, find the items they want, clean the area, find a respective number of the same object in that area, make a puzzle/combine pieces of items into a jewelry and that move to the next area. Also the dialogue from my point of view is really stupid, but again a 4-6 year old kid will like it.
Despite all the imperfections the game has, it’s more than playable and will give you a fun time.
1338 0 Share
5.0 (1)