Is Big Farm a Good Game?

The simple answer is not really, the big reason is that the game is just a copy of those good old farming simulator, Hayday, or Farmville. The bananas pay is good, however, for actual entertainment, I would go and try another game. The quest system in the game has an interesting kind of way to make you progress very fast but before even running out of gold to speed things up I already got the guys throwing some microtransactions into the mix so that takes a huge hit on the rating, but it is a free game so I can't really blame them for wanting money and not having ads from what I could see. But what I do mind is it being so blatant. It is really obvious that to get super far in the game it is a p2w thing. Overall I would not recommend the game unless if you are going for bananas to buy some other game or thing to play a game.

By playing this game you can get 100 Play
Now the game graphics are pretty good, the game mechanics are kinda weird on the PC, sometimes I got really mad at some of the controls as I would want to do certain simple things and for controls it had about as much as a tutorial of how to build an IKEA chair, it is confusing for no good reason. It could be refined a bit and It could be a great control scheme. They also make the waiting times pretty quick in the early levels so you can advance really quick. As far as the missions they are quick and easy to do. Pretty brainless gameplay and really repetitive at some parts. but this is not an AAA title so I can't hold it too hard on that. Clearing land could have been a bit better or just let you build anywhere as it does not really add anything besides another "quick mission" Could have been removed. 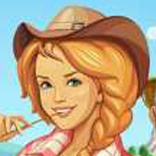 100 Play
Being able to advance really quick is nice, but as I was able to get this far in just an hour I know that later it would really urge you into buying some gold, one of the missions is to buy gold but you don't need to do that mission to keep going in the game. Also if you love reading you will have a blast with the number of notifications and useless backstory this game gives when it really only has one needed backstory element, you are a farmer and you must farm. There you go all you need to know. As you can tell I may have a bias opinion but this game really is not worth the time for how much it wants to just take the money from you. Also making it seem you are getting lots of resources it has the units be really high even when if you reduce it by one digit you get the same exact thing and much more manageable. So just get your bananas and get out.
1330 0 Share
5.0 (1)