Night in the woods review

Night in the woods is a mainly pc based indie game that got popular a while ago and is one of the more popular indie styled games. It is puzzle based with slight multiple choices and extremely plot heavy. It is appropriate for tweens and older as they will be able to appreciate it more for it's plot and also some semi dark comments are made on things such as abuse, murder and the occult so if these trigger you then this may not be the game for you. The game does not give you much in the way of tutorials besides the very basics to begin the game so it would be helpful to know your way around a keyboard before you begin the game, however if you don't it is still very possible to play it will just take a bit more frustration and time to get into it. While you can get it on swith, xbox, playstation and others remember this is the pc version I am reviewing so some factors may differ a bit between consoles used. I will be reviewing the gameplay the graphics and overall giving my opinion. The plot begins with the protagonist in her old family home returning from somewhere that has been burned down. You then get to discover your old home town and meet up with your old friends that are the main cat of this game. Each character is unique allowing for the gamer to either love or be irritated by their respective quirks however it would be hard to outright dislike one character even quirks included. You also can chat to and interact with civilians and NPC's in the areas you travel to and see their conversations as you pass them; while this is a minor detail I really enjoyed this as it fleshed the game out and brought it to life. There is also the sections of the game when you are asleep that have a whole different theme to them that is colourful and yet mysterious, the music also captures this aspect well. Speaking of music you also get the guitar minigame for each season of the game which I found very enjoyable and it is also cool you can play this from your room so it is easy to access. 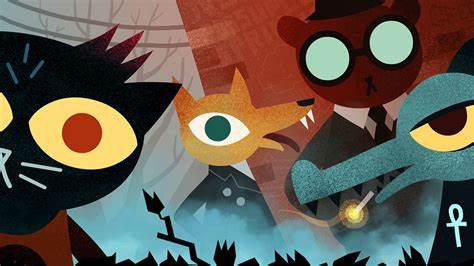 As for the graphics there is a lot to say. It is unique focusing a lot on geometric shapes for design yet while still being rustic manages to also somehow appeal to the senses. This is also highlighted by the changing of the seasons in game which causes the backgrounds to edit slightly, this again is a very nice small detail as you often have to go the same areas many times and this prevents boredom of the atmosphere. There is a wide variety of emotions that are caused by the graphics from mystic feelings to comforting ones in the home all the way to borderline uncomfortable in the more sinister scenes. It is around 20 pounds which is on the cheap side for a full fledged game however the game can be played within a few couple hour play sessions if you are like me and have a average experience level and a bit of help from a walkthrough in parts. However you must also consider due it'[s multiple choices it does have limited but some replay value. To conclude if you want a very plot heavy game with fleshed out characters and easy on the eye graphics and don't mind a arguably steep price tag then this game is for you.