Should you play TF2?

Tf2 is one of the biggest free to play games if not the biggest on steam.
From what iv'e noticed from watching YouTube once Overwatch hit the shelves a Youtuber named Muselk
https://www.youtube.com/user/MrMuselk
started making videos on it.
He originally played TF2 for a long running series on his channel and after reading the comments noticed that people were starting to take notice of TF2 again even though the internet has since proclaimed it "dead". In my opinion Tf2 is growing in popularity over the last year and has opened up new doors to PC gamers like myself and others who don't have all that much money to spend or just don't want to one a game they might not like. I've created this review to help new players understand the way things work and if they should spend time trying this game out. 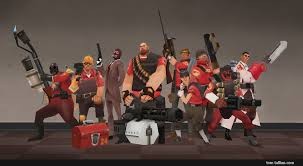 By playing this game you can get 100 Play
TF2 plays very similarly to Overwatch so if you enjoy Overwatch i would definitely recommend giving it a go.
When you first start you will have a layout that is easy to understand with the menu all laid out and understandable.
One thing that is probably the biggest killer are the in game purchases and if you haven't read into how item drops work will make the game seem pay to win.
this is not the case as all items are either cosmetic or unlock-able through the item drop system.
The item drop system is the way you unlock weapons without having to A. complete an achievement or B. spend real money.
The way the system works is that every week on Thursday if you have not spent over 10 hours playing you are eligible to get item drops just by playing the game this allows people who play a lot of video games to try out new items.

100 Play
Tf2 can be an easy or hard game to get into since it doesn't act like a normal shooter at all with wacky mechanics and colorful class choices you could either get confused right away or mesmerized by the amount of customization option.

I think tf2 is a game you need to try at least once if you've ever played a shooter game.
Even though the heavy demand that you spend money can be frustrating you can easily earn items by playing a lot.
Some items you have to pay money for such as almost every single cosmetic item in the game. these don't help you play the game but you can use them to make your character more stylish. you can also open up crates which have a chance to have a "strange" or "unusual which gives the item an effect but otherwise does nothing to help you in-game. you can also get skins from these crates as well.
1753 0 Share
5.0 (1)