10 Days To Save the World - The Adventures of Diana Salinger

Introduction
“10 Days To Save the World…” is another hidden object game on the Bigfish catalog. You are playing as Diana, some kind of female version of Indiana Jones, who has a mysterious amulet and searches tombs to uncover its mystery in order to save the planet. It has a decent story, some background story of Atlantida. At first impression I must say: “What’s wrong with this huge name?”. The game starts at the normal rate but the story then is almost poured in your head. It seems that Diana has the best teleporter because there were no puzzles/mini-games when you were travelling. You just need to click on a point on the map and boom new location! That’s true it wouldn’t be interesting to see the actual voyage but a little animation or some time passing being present in the story wouldn’t hurt. PROs
- Interesting story at the start.
- You can replay dialogues and scenes.
- There’s a lot of variety in objectives.
- Everything you find is used in some way and you have a fixed mission so you won’t get to far from the story.

CONs
- No resolution change setting is present.
- Font used in dialogues and “find objects” list is small and hard to read. It also gives the impressions of low quality game made in 5 minutes.
- Music becomes irritating because of its repetitiveness.
- Lack of voice acting.
- Some animation wouldn’t hurt.
- No cooldown when unnecessary clicks are made. That transforms the game from “find this” to “click until something happens”.
- The low quality affects the gameplay. At some levels you can’t see objects properly.
- The hint feature is poor designed. Even after the ring charges there’s still a big cooldown left. 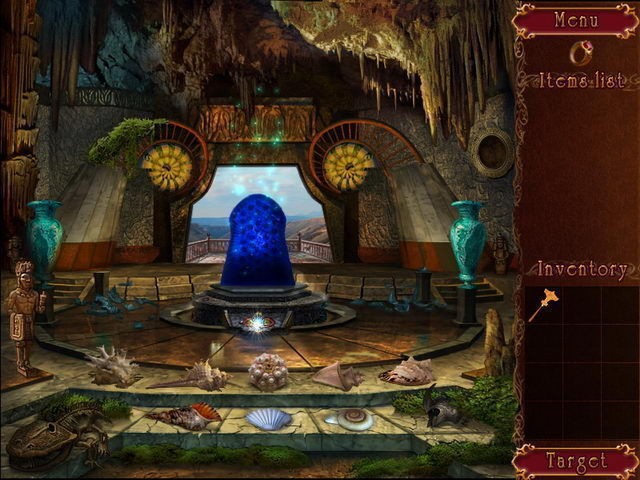 Opinions
After I played the game I must say that’s not like classic hidden object games. The game gives you a reason to search and collect those items and then you’ll use them properly. The story is linear, you know from the beginning that you must uncover the secrets of the amulet and that’s basically it. The lore is almost inexistent and what the only things you discover won’t be treated with much interest. No voice actin, no animations, it’s almost like the game is dead but still kept me interested. The objectives/mini games in this game are fun and that’s the more reasonable part of this hidden object game. The classic parts where you need to collect a list of items ae basically cookie clicker parts. Some of them very easy others are hard, but you can click as long as you want because there’s no cooldown. There’s also a ring which gives you hints. Unfortunately, it has a very long cooldown. The game is more than playable, but it made me quit after the first levels. The reason is it gets boring, nonsense and the worst part is the low quality of the assets and the resolution of them.
1202 0 Share
5.0 (1)