You can abide by Wildcard's rules on official servers, or brave unofficial servers where anything goes. There are servers where dinosaurs can never be tamed, primitive servers with no advanced technology, extinctions servers which reset once a month, servers with procedurally generated maps, and endless combinations of mods and user-created additions. In terms of pure stuff, Ark's scope is mind-boggling, and you'd be hard pressed to call any version the "definitive" one. Beneath all the variables and permutations, however, and beneath the prehistoric surface dressing, Ark is, in truth, a pretty formulaic survival game. It sticks doggedly to the familiar, slight resource gathering and expansion loop that, from Minecraft to Rust, has become the well-worn mainstay of modern survival games. I like the game. 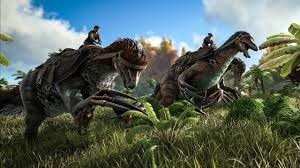 By playing this game you can get 100 Play
You know the drill already: punch rocks to make weapons to chop trees to build structures to level up to access more things to smash and build and craft. It's compelling but only insofar as you quickly find yourself locked in inextricable loops of menial busywork and delayed gratification. For some, Ark's relentless surface distractions will delight, but for others less easily swayed by the smoke and mirrors, it'll feel like a banal, repetitive drudge. Ark's prehistoric theme does go some way to mitigating this: there's a definite thrill in ownership and acquisition of its mighty beasts (even if it doesn't take long before they stop being things and start being functions again), and there's certainly pride to be had from setting your own goals and admiring your achievements after the endless toil and grind. But when you're not in the naturally obfuscating turmoil of PvP, it's hard to ignore just how anaemic Ark's core systems really are. 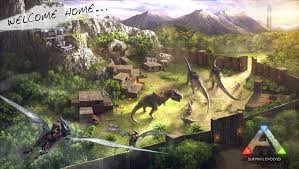 100 Play
Wildcard does seem to have recognised this, and attempted to create more fulfilling secondary goals beyond pure survival - treasure hunting, end-game bosses, spelunking - but even they fall into the trap of grind and busywork, and can't disguise Ark's overall lack of elegance and depth. Ark too often foregoes nuance in favour of sheer overwhelming volume, and it's an approach that, while thrilling at first from a purely sensory perspective, leaves the experience feeling a little hollow. You need look no further than Ark's idea of a balanced survival challenge: there's barely any attempt to lead new players into the experience gracefully; step out into the wild and you'll immediately run slap-bang into a wall of death beasts, stretching away in every direction. Progress comes through sheer brute force perseverance, endless repetition, and more than a bit of luck. And, as a result, success is rarely about skill and more about the quantity of time you can dedicate.
1043 0 Share
5.0 (1)