What is Akinator and what is it about

Akinator is a game where a robot gives u tons of questions and u have to try and answer the questions and u have to make the robot guess what you are thinking of. Akinator is a popular game made by a company located in France called Elokence. Akinator is very good at guessing and any 3 modes u pick the robot will most likely guess what you pick. I have only beaten the robot a couple times. And that was with creators that weren’t that big. Since the robot in Akinator doesn’t have a lot of small creators added since they aren’t popular enough. Akinator even has jobs for people to get so if ur looking for a job then u can apply at Akinator. Akinator is one of the best simulators in my opinion it has so many Youtubers, actors things and objects that u can guess. I love Akinator and I love to have fun with my friends on it since u can guess anyone that is famous enough. Akinator has been popular for a long time on YouTube, Twitch and many people have made videos on the app/website. 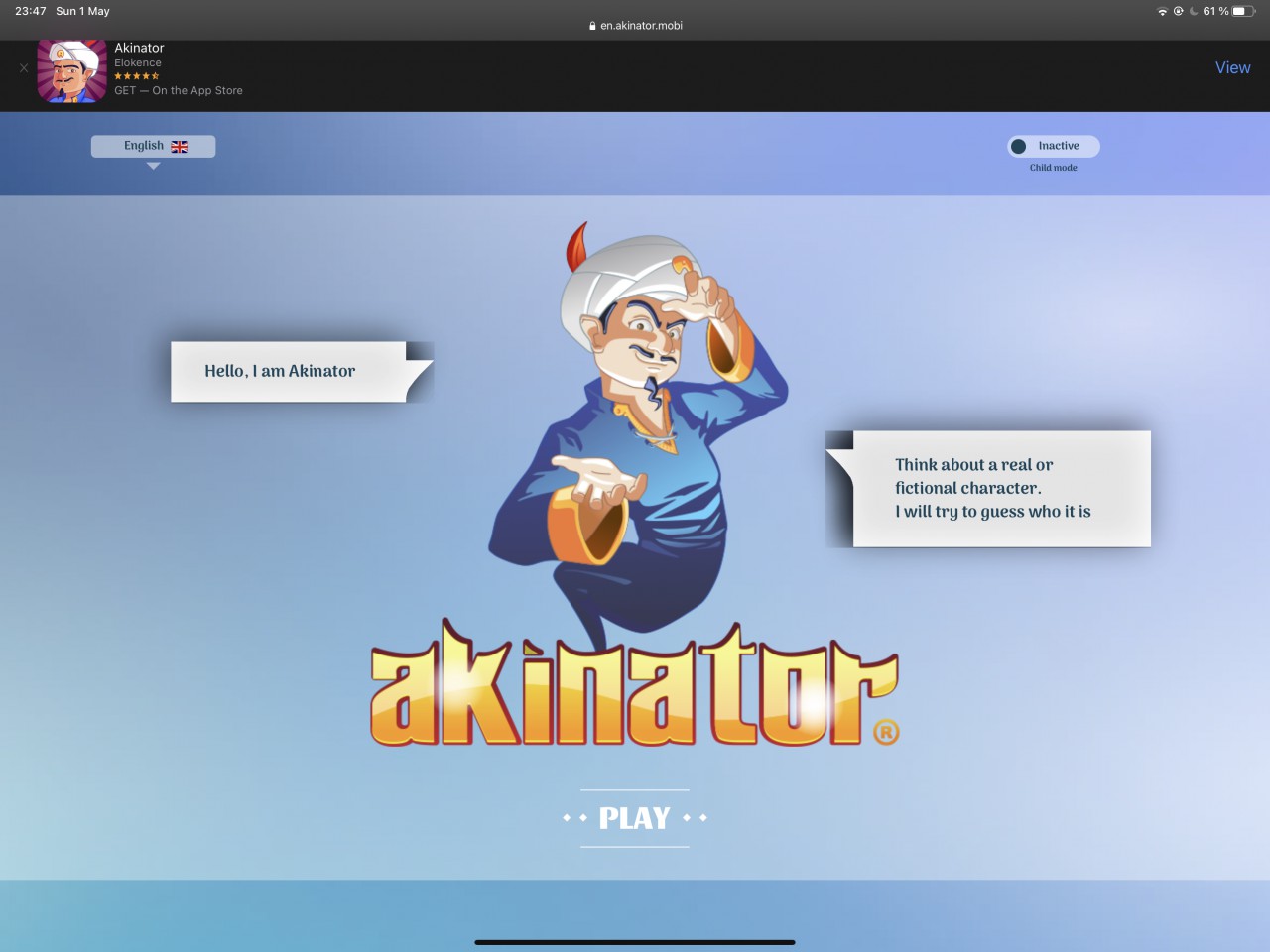 How the website works. U start a game Akinator then asks u a question u can answer yes,no,don’t know, probably and probably not. When u finally answer the question a new question pops up and u have to answer. This is how they are guessing what you are thinking about. U keep on answering the questions and eventually Akinator guesses what you are thinking about. Akinator may guess wrong some times but it usually gets what your thinking about fast. If your lucky or your character isn’t famous enough then you might win against Akinator. When you win just write ur answer. Akinator is also an active game and it receives updates nearly every hour when they add new people to the game for u to play and use. If u want to guess a object u can guess it Akinator if u want to guess a character then u can also do that there is so many features and that’s why I love the app. Akinator is also very entertaining. Akinator in my opinion and my experience is a fun game to use when ur bored or when j are with friends. The game does get boring when u always win or when Akinator guesses ur answer straight away. What I think is bad about Akinator. I think they should add more characters and more objects that u can guess to the game. I also think it’s bad that there is no idea page like where u can guess a idea. Things I like about Akinator. Akinator is probably the best simulator in the world since it is so popular and since it’ is one of the best websites and apps that are free. Great to play with people u know and great to play alone. It’s hard winning so it is a real big flex when you finally do without spamming or doing something that easily will make u win unfairly. Do I recommend playing Akinator. Yes I recommend to play Akinator to everyone on the planet and I think that everyone should try and play Akinator and have some fun with a bot guessing what ur thinking about, And I recommend it for friends and family since it’s fun and entaining and it’s also giving me knowledge on what I shouldn’t answer if police are asking me questions or something like that.