The flaws of league of legends

League of legends is a very good game. We can tell this from the fact that it is one of the or the most popular game ever, with over 100 million active players. You'll hear very many people whine on and on about league of legends, how some champions are unbalanced and how the game isn't fun anymore, so I've decided to review league of legends very critivally to show you the legitimate issues with it.

League of legends doesn't do a great job at stopping these peopel. There are games where a silver is matched with a plat and that is just an issue that riot has to address as it is because of them however riot seems to think that boosting and smurfing is on the community and that they do not have to deal with it for that reason. This makes very many people mad because being told that you should not blame them for playing with a Iron tier player who got boosted into diamond. I think that riot should try to stop these types of behaviours and try to discourage them as ch as possible because even if they cannot fully stop it, at least the community will see that they are doing something to help. 2. League of Legends is focusing balance updates on competitive play

Now i'm not talking about Low diamond games, not even Challenger, I'm talking about professional play onthe stage. Many people dont like the fact that riot seems to make changes solely based on how it will affect the pros and it can be frustrating for a bronze player who is constantly losing to low elo stompers like garen to see that garen is getting consistently buffed. This can cause confusion and can build a large amount of remorse in the low elo players. Now this is a very difficult problem for riot to address because they are, at the end of the day, a business and the large sum of money they get from sponsors and selling tickets for these pro games is very important. Now people will say that: "Riot is already a billion dollar a year company, they should take a bit of a money loss for the better of the game!"and although I agree, Riot makes decisions based on monetary gain, and that is how it is always going to be. This however does not change the fact that this is one of LoL's flaws. 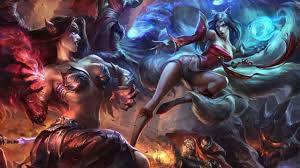 3. League of Legends is too punishing to beginners

My last point is what i believe is the thign standing in the way of LoL's further success. If you are a player and are reading this, there is a very good chance that you learned the game at least partly from a friend. Almost everyone agrees that the tutorial doesn't teach beginners enough but not everyone talks about the huge amount of toxicity you can recieve for simply being a new/ bad player. It is very demotivating for a new player to be insulted over and over again for the simple fact that they haven't yet put thousands of hours into the game. Because of this it seems that League does not ahve a steady flow of new players joining the game therefore, they need to findd a way to make sure that the veterans keep playing. This, however seems not to be happenign as more and more players are leaving.

This is the conclusion to my first review! I hope that it was informational and made you realise the cons of tthis otherwise amazing game! I hope it helped and thanks for reading!