We all have played shooters and we all know how overpowered rocket launchers are in any kind of shooter game. Team Fortress 2 is much more unique than other shooters. Having a rocket launcher will not give you much advantage over other classes since every class is unique. In team fortress 2 the rocket launcher is handed to the soldier. The soldier is an American dude who is very patriotic. He is a great class for starters because of his easy-to-learn loadout as well as his overall simplicity. The soldier is simple but he is also very versatile. He is so versatile class because of the extreme amount of items in his loadout. I will talk about his loadout a bit later but for now, let's focus on how the soldier is supposed to be played. Firstly soldier is a DPS class or more of an offensive class since he can easily dismiss a large cluster of enemies with his rocket launcher. Second thing is that he has a rocket launcher so that means you can pull off many crazy plays with it and also movement techniques like rocket jumping. Just like other classes the soldier also has many unique playstyles like the offensive soldier, defensive soldier, and the flanking soldier(trolldier). The offensive soldier and the defensive soldier shouldn't be hard to understand since their name speaks for themselves but what is interesting here is the flanking soldier. Flanking soldiers or the trolldier is a subclass of the soldier which revolves around using the rocket jump and the soldier's melee market gardener. This kind of playstyle requires a certain kind of loadout which consists of the rocket jumper, man threads or the gunboats, and the market gardener. Now the main purpose of this subclass is to get to the enemy's backlines by using their rocket jumps to flank them. Once they reach they use the market gardener to finish them off. This is also called market gardening. You may think why do they use the market gardener melee especially? To clarify why this is called market gardening, I have a picture below the second paragraph. 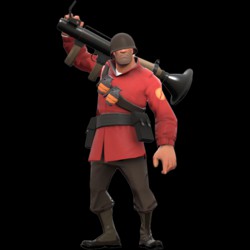 Since we have talked enough about the soldier class and its subclasses now let's move on to the soldier's loadout. The soldier has a simple default loadout without any contraptions. The soldier's default loadout consists of his rocket launcher, his shotgun, and his shovel. His default loadout is very simple and it is also really easy to learn but you can customize it to your liking if you want to. Starting with the rocket launcher, I would say it is really good and really easy to learn. It deals a lot of damage and has a decent rate of fire. This is easy to pick up so it is ok to use it as much as you want. Because of this, I wouldn't suggest replacing it, but if you want to try something else then you can try the direct hit or the beggar's bazooka. If you are more into rocket jumping then your best bet is the liberty launcher because it deals less self-damage while rocket jumping, while also having a larger clip size and faster projectile speed. Don't use the rocket jumper unless you are a trolldier. I am saying so because the rocket jumper deals 0 damage. If you don't believe me then you can check out the weapon for yourself. The rocket jumper is only meant for rocket jumping. If you are using the rocket jumper then you cannot carry the intelligence briefcase in the capture the flag mod. You are not allowed to carry it because the developers thought it would be too overpowered. Since you can't win the game without picking up the intelligence you also can't win the game. Talking about his secondary the shotgun is a really good weapon. It is not necessary to replace it but I would suggest replacing it with something like the buff banner, concheror, panic attack, man threads or the gunboats. All of these alternatives have abilities that somehow can be better than the stock shotgun. Lastly, it's time for his melee which is probably the weakest part of his kit. I don't mean that it's underwhelming since it deals a decent amount of damage but my concern is how weak it is compared to his other weapons. The soldier is a slow class so it will be hard to connect melee hits which means that melee is kind of useless. Some alternatives can prove to be worth your time. Those alternatives are market gardener, escape plan, disciplinary action and half-Zatoichi. The other two alternatives, the pain train and the equalizer are also not that bad but I wouldn't recommend them over the others. 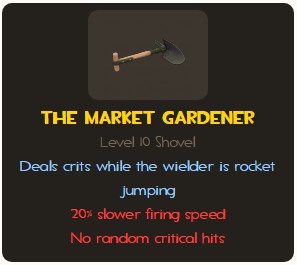 Since we have already covered the loadout let's talk about some things to be mindful of when playing as a soldier. Firstly, you should know that you are one of the slowest classes in the game. Because you are very slow you will have various disadvantages. You can neglect the disadvantages by using movement techniques like rocket jumps. Rocket jumping shouldn't only be used while trying to traverse the map but it should also be used mid-fights to pull off some insane plays or to trick your enemies. Another thing to be mindful of while playing as a soldier is to get to the high ground. When you have the high ground your enemies will have a harder time dodging them and you will have more chance of hitting them. You should also aim to shoot near their legs. Shooting them in their legs will launch them upward. Doing this will not only launch them upward but they will be paralyzed for some time and their aim will mess up. You will also have an easier time connecting your shots. Lastly, I would like to say that use combo attacks for example pulling your shotgun right after you hit your rocket. This way you will guarantee more damage in a shorter time. Well, just like any other class the soldier also has much more to him than just this. This includes things like positioning, aim e.t.c. But you will learn these things with increasing gamesense. That's it for today, have a very good day.