In its official guise, Ark is not a game that's shy about frittering away your free hours. Resource gathering, building, farming, taming, and breeding can all take huge amounts of time, even during an Evolution Event when all of Ark's official server multipliers are cranked up so things happen faster. Building a modestly size based can take hours of resource harvesting, and taming a mid-level creature can take even longer. Baby raising, meanwhile, can require days if not literal weeks of constant attention. Even regular maintenance and upkeep requires significant time investment if you're playing online, as gas supplies dwindle, and your creatures begin to starve.

To get the most out of Ark on official servers, you'll either need to be incredibly time-rich, or you'll have to knuckle down and join a tribe of friends or strangers. 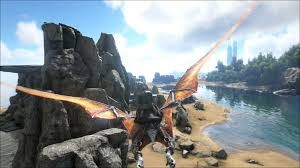 By playing this game you can get 100 Play
That might sound intimidating, but when it works, when you find a good group of people to play with, and on the right server, the sense of community and camaraderie can be wonderful. The best servers will buzz with barters and trades, you'll strike up friendships and alliances with neighbours, maybe even share resources and explore together - two years on, I still chat to the kind soul that rescued me from raptors when I first started playing, selflessly swooping down to help while I ran around naked and confused. The darker side of this of course is the trolling, the griefing, and the often interminable toxicity. It's part and parcel of online games, of course, but I think that it's exacerbated in Ark by the pure time investment that lies at the core. It can create wonderful bonds, and a sense of collaborative pride, but online is awash with negativity and paranoia, borne, I suspect, from the fear that, at any given minute, hours of hard work could be undone. 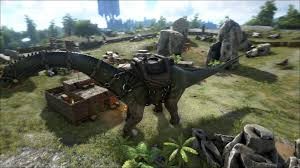 100 Play
When it takes so very long to do anything meaningful, people grow naturally, aggressively protective of their investment in the game. One of the most frustrating aspects of Ark, though, is that its biggest design problems have been long evident, and there's the sense that, rather than addressing them, Wildcard has simply elected to shove them to one side. Countless features have been added in the last two years, but few have received notable improvement or refinement afterward. Building is still unwieldy, breeding is still mercilessly dull, tree house building - a lovely idea in principle - fell almost immediately flat. Elsewhere, its rushed UI update can be hugely unwieldy on console, balance passes have been halfheartedly fudged, and performance is still not great, even on a high-end PC - and that's just for starters. Post-launch improvement is a definite possibility, but right now, in its "finished" state, there's still an unshakable, slightly uncomfortable sense that Ark might collapse in on itself at any moment.
1003 0 Share
5.0 (1)