Yet despite its issues, Ark can so very often be a wondrous, rewarding thing; a fascinating, beguiling sandbox of possibilities and story generation. Many of my Ark adventures will stay with me long after I stop playing: the terrifying first time my tribe mate and I rode a rickety raft all the way around the island to collect a spinosaurus from a generous neighbour (and then hilariously sailed its oversized heft all the way home again); the tense, thrilling hours we spent shivering in arctic climes, endlessly warding off tyrannosaurs to acquire a woolly mammoth with a particularly nice hue. Or the day we took a trip to ancient caves in search of artefacts, only to end up with half the server helping us liberate our favourite wolf from a particularly stubborn hole. Ark's undercooked systems and wobbliness can infuriate, exhaust, and even bore, but it's hard to begrudge a game capable of generating so many memorable tales. 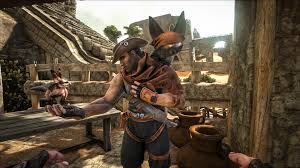 By playing this game you can get 100 Play
In its official guise, Ark is not a game that's shy about frittering away your free hours. Resource gathering, building, farming, taming, and breeding can all take huge amounts of time, even during an Evolution Event when all of Ark's official server multipliers are cranked up so things happen faster. Building a modestly size based can take hours of resource harvesting, and taming a mid-level creature can take even longer. Baby raising, meanwhile, can require days if not literal weeks of constant attention. Even regular maintenance and upkeep requires significant time investment if you're playing online, as gas supplies dwindle, and your creatures begin to starve.

To get the most out of Ark on official servers, you'll either need to be incredibly time-rich, or you'll have to knuckle down and join a tribe of friends or strangers. That might sound intimidating, but when it works, when you find a good group of people to play with, and on the right server, the sense of community and camaraderie can be wonderful. The best servers will buzz with barters and trades, you'll strike up friendships and alliances with neighbours, maybe even share resources and explore together - two years on, I still chat to the kind soul that rescued me from raptors when I first started playing, selflessly swooping down to help while I ran around naked and confused. 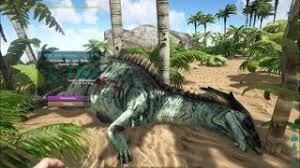 100 Play
Ark's breadth is spectacular, and it's easy to lose hours to its tight loops of resource gathering and expansion. And once you've got to grips with the basics, your options grow even further: you can play peacefully on PvE servers, aggressively on PvP server, or offline as a single-player game. You can abide by Wildcard's rules on official servers, or brave unofficial servers where anything goes. There are servers where dinosaurs can never be tamed, primitive servers with no advanced technology, extinctions servers which reset once a month, servers with procedurally generated maps, and endless combinations of mods and user-created additions. In terms of pure stuff, Ark's scope is mind-boggling, and you'd be hard pressed to call any version the "definitive" one.

In the end, Ark is a game that's impossible to recommend unreservedly, but it's also one that isn't easy to dismiss. It may frustrate, and flounder, but, at its best, it's a game capable of delivering true wonder and spectacle; one full of endless possibilities, thrilling exploration and discovery, tense action, satisfying social collaboration, creativity, destruction, and, yes, dinosaurs. It's rarely a great game - and there's a strong argument that, by this point, it really should be - but when Ark's improbable wealth of moving parts properly click, the result is almost always an incredible adventure.
1240 0 Share
5.0 (1)