It’s been five years since the released of Asphalt 8 Airborne, after that they followed with the release of Asphalt 9. So, the question is, does it upgrade that much such as the gameplay, visual graphics and the gaming environment itself.They level up the gameplay especially the graphics, they add more details on it and the gaming environment were more realistic than the Asphalt 8 has, awesome right?I found no difficulty on the controls which is a good sign for a steady gameplay and experience.They also add more details on the car models.Asphalt 9: Legends makes you feel like a racing god, through its enthralling theme. This game lets you race the way you want, by not restricting you to a set of rules. The primary theme of this arcade racing game is, to compete in fierce racing battles and upgrade your vehicle in the meanwhile. The ability to perform stunts is a great feature of this game; as such stunts can also earn your rewards. These stunts are not really difficult to master, even beginners can get used to doing stunts if they play the game for quite some time. There are many real life car models, ranging from basic sedans to multi-million race car models such as Ferrari, Bugatti, and many more. 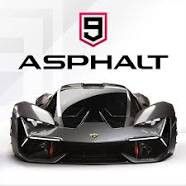 Stunning visual graphics, making it a realistic game to play.
Different types of rewards that allow you to unlock different gaming elements.
A racing game that’s compatible with multiple platforms.
Thrilling gameplay that challenges your gaming skills.
Customizable cars that can be personalized according to your preferences.

Multiplayer Mode, which allows you to compete with 7 other online players.
A garage that offers you all the customization options you need.
A new and innovative feature, Touchdrive that takes the game to a whole new level.
A wide range of real world car models that you can pick from.
Three types of in-game currencies that can be earned.


System Requirements
Since this is a high-end game with amazing graphical elements, you may need a decent hardware to be able to play this game. For Desktops, you need a minimum RAM of 4GB, Processors of i3, and 1GB Graphic Card. If you want to play this game on iPhone, you need a device that’s at least iPhone 6 or above. For Android devices, you can check the Google Playstore to see if your device is compatible or not.

Graphics
Gameloft Barcelona has taken the game into a whole different level, as this game has been equipped with stellar graphics. Not only the gamers, but the gaming gurus have also been lauding this game about the graphical elements. Each and every element of the game has been built with great detailing. Key elements such as roads, cities, infrastructure, and weather have been designed with utmost care, as you can experience the stunning visuals of this game when you play. The slow-motion stunts are a treat to watch, as they give you joy and happiness whenever you drift your car.

Gameplay
Asphalt games are famous for their high-speed gameplay, which is common among all the game editions. Asphalt 9 has introduced a new feature called Touchdrive, which lets you swipe through the screen to navigate your car’s direction. It manages the two most important factors of driving which are acceleration and steering, so that you can focus on the other things that can help you win the race. This game has also introduced another new feature called Blueprints, which you can earn after finishing each race. A blueprint basically earns you a new car part or accessory. By earning more blueprints, your chance of upgrading to a new car increases. If you want to compete with other people, you can participate in the online multi-player mode, which lets you race against 7 other players.

Conclusion
Asphalt 9: Legends is built to be a legendary arcade racing. The game doesn’t compromise when it comes to quality. Regardless of the platform you’re playing on, the game delivers. For racing game fan boys, this could be the best game to be released in the recent times. With a wide variety of cars, accessories, tracks, and events, you can play this game for a long time without any dull moment.