Aura Kingdom is a free to play massively multiplayer online role playing game. It is also called Fantasy Frontier Online and Innocent World. It came out in December of 2013. It is a very anime styled 3D game that can be played on most systems unlike other MMORPG's that are out there and require beefy computers to play. The graphics in the game are very good especially for a game that came out in 2013. It has aged very well and unlike older MMORPG's that are out there the graphics are not hard to look at and can keep you entertained for a while. The story is very solid and isn't as boring as other games but it isn't super important if the story is not what you care about in MMORPG's. It is targeted at MMORPG player that are more casual and can be played by new players and old players alike. By playing this game you can get 100 Play
There are a wide variety of playable classes that are all highly different and allow for people who like any playing type to play the game and still have fun. There is also a gliding system, this is a very unique thing that is not seen in any other MMORPG's. It is used to move around the world easier by gliding in the air. While other games do have things that can help players get around the world, this is a extremely unique way to do so and it is a very entertaining feature that is also helpful. There is also a large pet and mount system. Pet's unlike, in some other games, can help aid you in battle. Mounts are the same as most and they can get you places faster. The animations in the game are flashy and unique with fast game play and fights that are an abundance of fun to watch and be a part of. 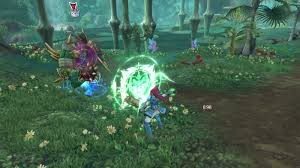 100 Play
Like most MMORPG's after a certain point there is a lot of grinding needed once you get to higher levels to level up. It is easy to get stuck at higher levels due to the amount of grinding that you have to do once you get to about level 50 or so. The game does hold up pretty well considering that it came out 2 years ago, or just 2015 depending on when you're reading this. The games fighting and graphics are unique and are interesting and provide lots of entertainment. The game can be played by newer players, giving you guides and helping out. It can also be played by more experienced MMORPG players. This being said, the game is more casual than a lot of other MMORPG's that are out there so if you are looking for a low-key game to play this may be a good one for you. It is also free to play which is good for those who like MMO's but can't pay to play some of them.
1503 0 Share
5.0 (1)