A review of Crossout.

This article is gonna be about my opinion about this game while I was doing the three quests.

Let's start off talking what this game is about. The game is mostly a quick and fast paced game on multiplayer. This game is a massively multiplayer online game (MMOG) for short. You start off with a lame truck that you'll have to use for a few game matches, once you level up or do missions you'll have advanced guns, walls, engines, defenses and boosters you could use. Once you have that more advanced guns, walls, engines, defenses and boosters you could build and create and test your vehicles to see if they are good and built like a tank or fast as a plane. If you do want to test your Crossout vehicle you could spawn in NPC's to test your tank or fast vehicles. Also, you could pick a fraction that has certain guns and walls etc, you could get.

By playing this game you can get 2180 Play
Now let's talk about my opinion and my experience about the game while I was doing the three quest. After it showed me the tutorial, it took me to multiplayer and gave me a starter truck with low-level things. Then I started to blow up people vehicles and shooting out their tires and weapons with my two little machine guns. In the beginning, first few matches they were easy cause it was AI's on the other team and your team. But once you start to advance it's goes to AI's to real people playing that you're going against. Also In the first few matches, you might level up quick, but then like I said it starts to get harder you'll get a few kills and start not get a lot of XP which I hated cause it got harder to do the quest. So my opinion about this game from 1-10 I'll give it a 6 or 7. But someday I'll try it again cause the game is in open beta. 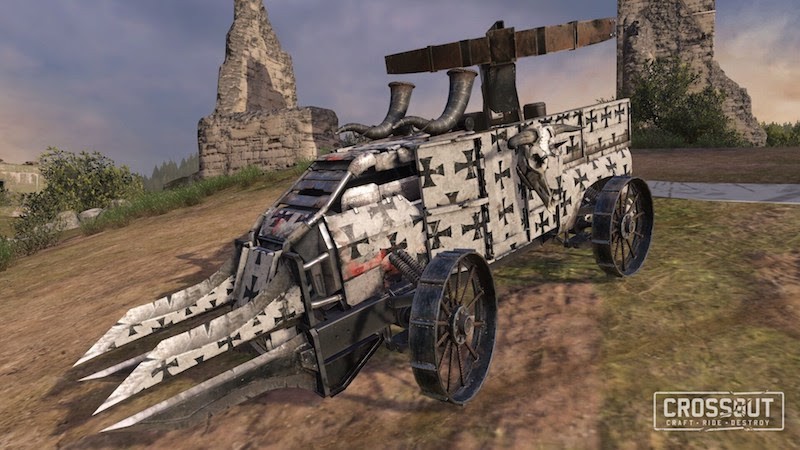 2660 Play
That picture above is an example you how you can make crazy & ridiculous vehicles.

Here down below is what the faction can give you and the uses of it.

Scavengers-- This faction has Explosive weapons they can blow up the vehicle in a few shots!

Nomads-- This faction has Heavy machine guns & you could put a lot of them which are useful for taking off their wheels, weapons, and other parts. but the bad thing is it's not very good at destroying the enemies vehicles.

Lunatics-- This faction has Melee weapon such a saws, drills, knives, bumpers and more. they are also lightweight and fast.
Now I'm gonna take about what I like about the game & not.
Pros: Explosives, and Customize your vehicle
Cons: Doesn't have many maps, very hard to level up if you got no kills or few, and bad graphics, not too many objectives
1960 0 Share
4.0 (4)