Counter Strike Global Offensive, is an Old FPS Shooter game that was released in 2012. The game was meant to be a sequel to the old Counter Strike, 1.6. And has now become bigger than any other PC FPS shooter out there.
With over 10Million+ Player's every month and growing, you can see why it's a hugely populated game.

In this review, I aim to cover everything from the game, including settings, gameplay, customization and my general thought through the game.
Just as a little statement, I have played the game for over 1600 hours, and yet I'm still learning and developing my skill on the game.
This game can be purchased on the steam market, but this game also has multiple different games. E.g the Zombie version of this game and the CS 1.6. Be careful your buying Counter Strike : Global Offensive

This game is supposed to be a fun game, and you will come across rude and annoying players and some .. eh.. genuinely confused people! If you get offended by people in game, Valve did resolve this issue, all you need to do is press "tab" and right click on the NAME you want to mute, and press "toggle mute" and bingo bango bongo, this stops all communication to them. 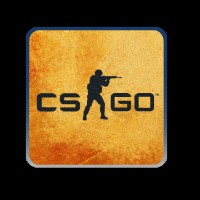 By playing this game you can get 100 Play
So as I said before, Im going to cover everything from settings to my general overall view on the game.

So let's start with the settings of CSGO.
Some of the settings in CSGO can be quite scary, with a lot of the game's features being split up.
A lot of the game's settings are very customizable everything from the brightness of the game, to what colours your teammates are!
Some of the video settings are based on your computer/play style, if you have a Monster Pc, you could most likely run the game on all High settings, with a
smooth game output, as it's not a very Graphic demanding game unlike its competitors e.g Call of Duty / Battlefield.
Although if you don't have a very good Pc or even a laptop, you can run the game on very low settings, and still be playing at a very good frame as it's not demanding a lot of power
from your Graphics Card / Chip.

Moving into the audio settings, Valve has released (a few months back) a setting that allowed audio to be 7.1 Surround. Meaning everything around you, (granted if you have good
enough headphones/speakers) can hear everything around you, in a full 360* 3D motion!
You can also customize things like In game music, voice chat and other cool settings to enhance your game play.

Some other settings include game settings such as Colour of your team mates name on the map, clan tag and other game-enhancing features to make your life easier when
playing CSGO. I found this very easy to do and can be quite good when it comes down to it.

Moving on from the settings, let's move into the all important Gameplay.
Gameplay in CSGO can be confusing at the game has a range of different game modes ranging from Deathmatch to Competitive. I only play Casual (Competitive with more players)
Deathmatch, (Team based free for all) and Competitive (the ranked game mode). Deathmatch and Casual are very easy to play, with no one to call you bad, or no one to make you want
to leave or cry mid game. Casual give's you a feeling that you're playing competitive but not with the pressure to win the game! It's NOT ranked. Deathmatch is how you can practice your shots and make yourself a better player.

Moving into Competitive gameplay, the competitive scene in CSGO is quite huge! With over 10 million players, the game's are not hard to find. You can play with friends which I think is great, but not only this, you can also gather a lot of in-game intel just from playing around. Although there are quite frankly some nasty, and un-human players in the game, they can be muted very easily, and this can help calm the stress of your team. Although sometimes in Comp matches, you may find yourself in a bit of a stressful situation, where one member of your team has done 80% of the work, and it's up to you to get the last kill, you get killed and your team mate is mad at you. You just need to tell them your sorry and you did your best and move on to the next round going into it positively. Although within all this, the game has taken a negative turn because of skins! Skins or virtual camouflages in the game have been sold to players, more specifically younger players that screech at you for not having skins but walk around the map flashing their knife or nice skin around, in turn getting them killed in the game and blaming you. This is something that needs to be controlled, and if someone does take the mick out of you for not having 'skins', either blocks them (great feature!) or ignore them completely and tell them you would rather spend £100 on a life than a skin.

Also with so, online mode's can bring some unwanted players that go by the name of 'Hackers'. These people are a nightmare to play against, with hackers finding new and genius ways to hack the system, being able to see through walls, flick onto enemies heads, and also little things like movement scripts. All these ruin the game and are the bane of a majority of CSGO players. This is not a terrible thing because if you catch a hacker, you can report them, and if the overwatch community member you get is a good one, that player that you reported will be banned permanently. Although with this, Valve didn't realise that players could just go elsewhere and make a new account fresh with new hacks, but to sign up with Steam you need a phone number. This phone number is now in Valve's system, and valve made an 'Anit-Cheat' protection for recurring accounts by linking all the phones together, so if one account gets banned. Well.. say Rest in Peace to all your other accounts!

Overall though, the online aspects of the game are really something to keep an eye out if you don't currently own the game, as it is very fun and is a very valid opponent to other Shooters. 100 Play
So as I said, I would evaluate what I've said for those lazy readers.
So let's sum it all up!

Counter Strike Global Offensive is one of the best FPS Shooters than a lot of other ones on the market.
With.. progressively getting better graphics and amazing sounds. Although DLC e.g 'Skins' can be a pain to deal with and well can also look really nice! Although this review is not as in depth as what some of them, but this should give you guys a run down on what CSGO is and well. I have some guide's on my profile for other CSGO ways! Some other thing's in game, like audio / graphic content are just little aspects of the game. If you consider the time people are putting into the game, e.g for Esports events, this game, although can be repetitive at certain times, still brings a huge Esport community with it. Just like other games for example Leauge of Legends.