What you have to know if you want to play the game.

Naruto Online is a simple browser game that is pleasing to the eye and is bound to a very popular franchise. The gameplay is straightforward, battles are easy - many will consider this game a cool little "distractor" but other will find it boring. I'm a fan of the series and enjoy short gaming sessions with Naruto Online but I would love to get something more than grinding with well known characters.

activity because the people who spend the most money or the people who are paid from the game end up winning every event from the game. The highest guild ends up running the whole server cause its almost impossible to beat the strongest people without spending money. When the server dies from people getting tired of being beat they just join the server with like 4 other servers (which are also dead) that have relevant creation and level to compete and merge. So its only the top people who have spent money and spending more money. There are only events that are for certain times during the day so if you dont dedicate your whole day to this game then dont expect much. This whole game is a con and ive seen the whole process. After years they have not added any features except for those that make people more stronger. They dont add features for the new people to eventually catch up to or be relevant to players on their server (which usually are secret employees), only add new servers to make more money. Its been years since i played and all they added was a couple new gimmicks to increase power and a hand full of units behind a huge paywall (Which secret employees get free in game currency to purchase and show off). BTW, all the units you try to summon are not random. Everyone 60 or so give you a rare unit, while every like 300 or more give you a super rare unit you actually want and they never tell you that the summon rates are ever mapped out like they are. Its an alright game but once you lose a little interest in it then just stay away because everything in this game is fraudulent and takes money and no skill.

As much as I would have liked to play a well made rpg in the Naruto universe, I must say that Naruto Online the official browser mmorpg is unfortunately a very shallow game.

In the game you play as new character you chose from among the 5 created for this game (1 from each chakra nature). You join naruto's team from when they become genin, and fight on their side as you progress through the original story. As good as this might sound, in practice it turned out seriously lacking anything that makes a game fun.

The story doesn't really give an explanation as to why you are joining team 7 as a 4th genin member, you're just thrown in there. An even bigger problem is that the way the game presents the main story moments doesn't even come close to the epic feeling of the anime. In fact if you were completely new to Naruto, you would often hardly even know what's going on.

The combat is as basic as it gets. You only get to decide the major skill usage of your characters, of which they each only have one, so even that is very limited. In fact you can automate that too, effectively making you a passive spectator of the fight. The deepest part of the combat system, is picking the talents of your characters, so that the skills they use synergise well in combat. Not that there are too many options mind you. 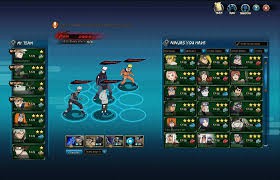 Overall Naruto Online may offer some cool nostalgia for long time fans, but let's be honest: a game you wouldn't even try if it didn't have the brand name of a famous franchise is a game not worth playing

Hopefully the game fleshes out the base components, but if you want to experience a solid tactics style game, you couldn’t do better than look at Naruto Online.

I have played about 6-7 months, now most games you can be the top just from playing, but this game your playtime doesn't mean anything compared to the whales, and compared to the game liasons who spy on what people say and report it to the mods. most youtubers who do the game are liasons, they get them as one so they wont say negative things about them. the fact that f2p players are pretty much ignored makes the game cancerous. also most events are rigged so you cant get the op ninjas from it.

As a Naruto fan I was happy to hear of this game, something I can play when checking facebook while taking a break from a Steam game. Its defined as a MMORPG but there isn't really much of the RPG genre in it, I mean you can walk about (sort of) but if following missions your character will automatically find the path to them should you choose to.
The Naruto name certainly brought players into this game where otherwise many would never even try (me included), having said that I'm not exactly disappointing far from it. Yes you don't really do much in terms of combat, or exploring and there are so many auto features that you are little more than a spectator but you do have a somewhat interesting levelling system with some sort of crafting ( strengthening really, still getting used to it but looks decent).
All in all I think the game is.. meh but being Free and from the Naruto franchise makes it worth a try if you are a fan of the show.