Minecraft and its gameplay

Minecraft is a very helpful game for young people to show their creative side. They can express themselves via this unique game and also can provide exciting times for the players. Minecraft has also allowed people to create servers and so allows these people to express their creativity as well as earn a little money. Minecraft can be played as a single player or as a multiplayer depending upon the mood of the gamer at the time. Different things can be created in minecraft. Also my favorite part of minecraft would be playing on such servers like mineplex or hypixel. The new game bedwars combines pvp with building and protecting a bed. This game uses minerals ores as a form of currency and so shows how diverse minecraft can be. I would give this game a 5 stars just because of its creativity that it inspires me to be imaginative and makes me feel like a kid. By playing this game you can get 100 Play
Minecraft servers have their benefits. They allow people to communicate with one another on the game. This shows that minecaft can bring people closer. It can unite people to one cause and can be multiple different games at once. This can be shown by the new game in hypixel called zombies. This game incorporates black ops zombies into minecraft and shows how minecraft isn't a one sided game but a multiple sided game and so this is where i delve deeper into my review. Servers can show that minecraft has been taken to a new level since the making of minecraft and when there was no serves. All I can say is that minecraft has fully developed since my first game of it and I can sagely say that it has vastly improved. I really enjoy this game and this second article has shown how illustrious and hard worker the developers are to create so many versions now were on to 1.12 and I am intrested to see where it will go next. 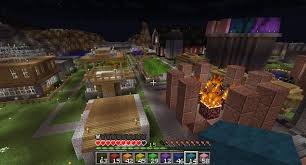 100 Play
My final article will probably be on the single player mode of minecraft. The photo above is something I made in creative mode and shows how much effort i am putting in to minecraft due to my enjoyment of the game. Without playing in creative i have already reached the end in my hardcore version of the game and defeated the ender dragon. This is supposedly the hardest thing to beat in the game and so I wouldnt say I am an expert but I would say that i am enjoying the game so much that i wish to improve my skills. This whole article has been a review on a game. Yet minecraft seems to be multiple games inside of one game. So a review of this game must incorporate all versions of this game. Finally I would just like to add that there is modifications to the game and can add things to this original game. Thanks for reading my review and I hope you understand what I have been talking about thanks.
1580 0 Share
5.0 (1)