Today, i am going to tell you about some of the mobs in Minecraft, I am not going to cover all of them because there are just too many, and some are hybrids.First, I am going to discuss the passive mobs. The chicken will give you chicken and feathers. The cow will give you leather and beef. The pig will give you pork. The squid will give ink sacs, the sheep will give mutton and wool. Killing the villagers won't give you anything, however you can trade with them for emeralds. Bats are just annoying and found in caves. Next, the neutral mobs, who won't attack unless you provoke them. The spider, moves relatively fast and drops string and spider eyes. Enderman occasionally drop enderpearls and teleport around when you attack them. They might disappear on you, so you have to attack effectively. as long as you don't look at them, you won't need to fight them.

By playing this game you can get 100 Play
Zombie pigman spawn from the nether and also from nether portals. An interesting thing is, regular pigs can turn into pigmen if struck by lightning. They usually drop rotten flesh or gold nuggets and rarely drop their golden sword or ingot. Next are the hostile mobs, who will attack you once they spot you. The creeper explodes if you don't kill it fast enough and drops gunpowder. The typical zombie is pretty slow moving and drops rotten flesh usually. Skeletons shoot arrows at you until you kill them, and you may receive bones or arrows. Witches are harder to kill because they may drop spells and potions that harm you. They may drop glowstone dust, glass bottles, gunpowder, redstone, spider eys, sugar, sticks, all sorts of stuff. Like zombie pigmen, if lightning hits a villager, a witch will appear. 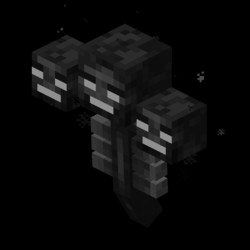 100 Play
A blaze drops glowstone dust or blaze rods. They can fly and they shoot fireballs. Slime are green squares that when killed, will divide into smaller slimes, they usually drop slime balls. This concept can also be applied to the magma cube, which is only found in the nether. They are unaffected by fire or lava and sometimes drop magma cream. The ghast is only found in the nether and float around. They drop gunpowder and ghast tears. They have extremely long range and shoot explosive attacks at you. Silverfish are very small creatures and are just annoying, as they don't drop anything. The Wither is an extremely powerful boss mob and is spawned by making a soul sand wither skull configuration. It drops a nether star, which won't despawn. The wither will grow very large until its health is full, and lets out a big explosion.
1148 0 Share
5.0 (1)