Smite Review. Should you play?

SMITE. It’s considered one of the best free multiplayer games currently and for good reason. SMITE is a free MOBA (Multiplayer Online Battle Arena) you can download for your PC, Xbox One or PS4. SMITE is similar to any other MOBA’s you may play(League of Legends, DOTA e.t.c) but with two key differences that make it stand out. First of all, it isn’t played from a top-down perspective like most other MOBA’s, instead it is played third-person. This means you are a lot closer to the action and have a better idea of what exactly is happening on the battlefield. Your viewpoint however, is much more limited because of this meaning there are a lot more opportunities for you to ambush your opponents and catch them off guard.

The second key difference is the characters you play as in the game. Instead of the characters having been created in the minds of the developers, the heroes you play as are gods from many different mythologies. Well-known pantheons such as Greek and Roman make up the roster but lesser-known gods from Japanese, Norse and even Hindu mythologies bulk up the playable characters list. One of the best things about this is the level of accuracy with which these divine beings are presented. Aphrodite the Greek goddess of love is a hot chick, Thor(I’m pretty sure you know who he is) is a bearded barbarian, Cupid(yes, you can literally play as a baby) shoots arrows of love at his enemies and Loki the Norse trickster god… is the most hated god in the game for his ridiculously powerful attacks. As well as this, abilities fit the god and their story and each god even has their own lore which you can read up on. I haven’t been this interested in ancient religions since Percy Jackson.

By playing this game you can get 100 Play
Each of the gods fit into a role that caters to a certain playstyle. Like getting kills and all the glory? Play assassin or hunter. Like soaking up all the damage and pissing off the enemy team by denying them a kill? Go guardian. Like being a glass cannon? Smite them all as a mage. Like adapting to the game and outsmarting opponents? Then warrior is for you. This means that despite the overwhelming amount of gods(82 currently) and the intimidation the menus and your first game present you can quickly find out where you fit and play to your strengths. Every god also has 4 abilities and a passive(you don’t need to activate it for it to take effect) unique to them and this gives you an exciting amount of possibilities for play.

SMITE is not without its failures however. One of the main issues I have(and a lot of other people seem to have) with the game is the balance. Due to there being so many gods, it is almost inevitable that some seem to get seen more than others and completely obliterate lesser-played gods in battles. But even so, the power level of some Gods compared to others is enough to make you at least raise an eyebrow and think “They seriously thought this kit wouldn’t be overpowered?”(Loki and Odin I’m looking at you). This goes hand in hand with the game’s other disadvantage which is the community. Sometimes you’ll get into a game and a player will instantly pick and lock in a god without discussing it with the other team which is just downright rude. Then, they will go on to chastise and insult you every time you die because you’re trying out a new god and haven’t got quite used to them yet. And then, just as you’re finally getting the hang of this god’s playstyle… your team will surrender. Although it is out of the hands of the developers for the most part, it still makes the game hard to get into and downright miserable to play at times. 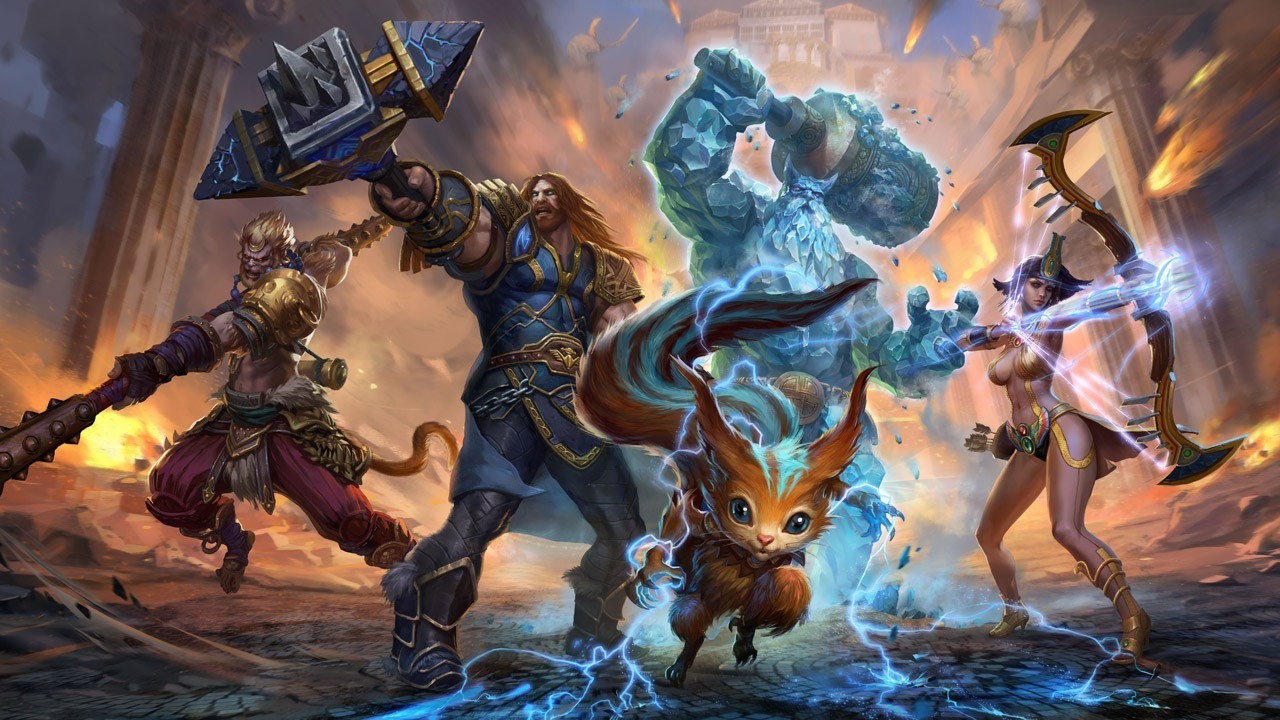 100 Play
I digress however. Despite this, the gameplay is solid and fun, there is lots of variety and attention to detail and the micro-transactions that come with a free downloadable game like this one are only cosmetic and don’t get in your face. Although daunting at first, you’ll find your skill and flair and get that penta kill before you know it. Currently, I have about 400 hours on SMITE and I doubt I’ll stop playing it anytime soon. Now if you’ll excuse me, I’m going to snipe some people as Ra the sun god.

Fun, easy-to-learn and intuitive gameplay
Attention to detail with the god’s and their lore
Addictive
Lots of content including 82 gods to unlock and hundreds of achievements.
Frequent updates
Free
Cons: