Stardew Valley a game worth playing

Stardew Valley is a 14 dollars game (at the time writing this article) where the player takes the role of the character who is done with his city life and moves to his grandfather farm after his death.
The game is open-ended and the player can take several paths on his journey from fighting monsters in the caves and mining ores to farming trees and crops.

The start screen has a lot of easter eggs but it also the place where you can create and play a new game.
If you are new to the game you'd want to press the "new" option and create your character with the desired customization options given by the game itself, you can also chose one of the many farms within the creation tab and every one of them has a different look and different traits.
After you have created your character the new journey is ready to start.

The first scene this game presents is the grandfather off our protagonist on his "death bed" giving the protagonist a "secret" letter for his grandchild to open when he is older and wants a change to his life. The bus made it to Stardew Valley where the player get's to met his first two people of the village Robin the carpenter and Louis the mayor of the town.

The two take him to his grandfather's old farm and give him a preview of the village and to who his grandfather was.
The player is given a set of tools that later in the game can be upgraded in 5 more grades each one costing 5 ores of the respective upgrade and money the player also is given 15 parsnip seed from the mayor as a start of his farming journey and as a gift. 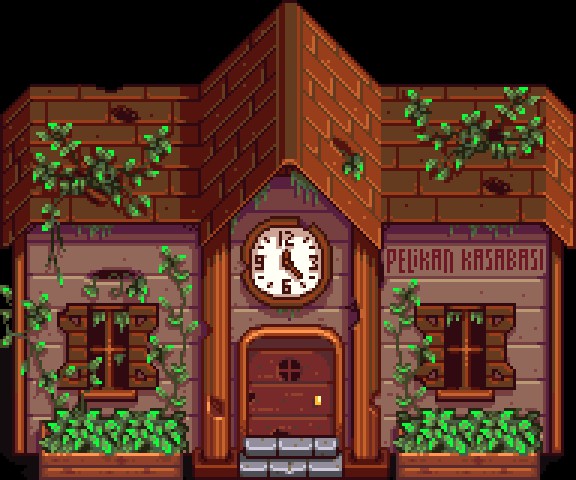 The main attraction of the game is the Community Center, a building in the middle of the village that was broken and that the player can either repair or sell to Joja.

The player can start his journey now on his new life far away from the loud and boring city that he didn't like and his grandfather knew he would hate and want to live by the county side
Stardew Valley is one of my favorite games ever and i truly love it. The simplicity and the fact that after a week or so (in game time) you are ready to go and know most of the basics of the game.
The game has a lot of secrets some of them discovere some of them not and the game is updated often by the team behind the game.
I would 100% recommend this game for everyone is just a good game to play especially if you want to relax and play a game or after a stressful activity.
The NPC's make the atmosphere a lot better each one having a story behind them and some of them even being single and can be married later on in the game.