The game recently turned 10 years old, so I feel that now, a full decade after release, is a better time than ever to leave a review on this game. What, with all the content Valve has added over the years, everything from the signature Hats, to the over-the-top Mann Vs. Machine mode.

So, let's start how I did last time, the gameplay. Carefully refined (pun intended) over 10 years by the same people that brought us the likes of Half-Life, DOTA 2 and CS:GO, industry legends, this game is hilariously fun, as long as you get into the right servers.

As with any Free-2-Play, there are gonna be it's fair share of obnoxious players, everything from Racism and Bigotry, to little kids screaming into their mics as they get gibbed by a Sentry gun. But, you shouldn't let that put you off. 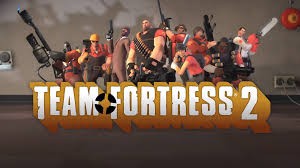 By playing this game you can get 100 Play
All the stuff I listed above shouldn't take you away from the great team-based gamelay this game has to offer. With 9 diverse classes, each with their own style and personality, you should quickly find one you like.

From the Russian singing of the Heavy, to the barely eligible muffles of the Pyro, each class is unique enough for you to be able to instantly identify them in the thick of battle.

Let's talk about the characters and what roles they perform in battle, while we're on the subject.

First off. the Scout. Get up close and personal in the blink of an eye with his Scattergun, before darting away to deal even more damage.

The Soldier. Aim for the feet to cause a much devastation as you can with your Rocket Launcher.

The Pyro. Feed sweets [Burn] your friends [enemies] whenever you get the chance to, play catch [Reflect Rockets and Grenades] with your Rainblower's [Flamethrower's] Air-Blast.

The Demoman. Aye, 'ye gotta be real careful like wit' 'yer Grenades and 'teh Stickybombs, an ambush is 'te best way to gettem good!

The Heavy. Deal heavy (pun intended) damage with your Minigun, but don't leave spawn without your precious Sandvich!

The Engineer. Use advanced tech to get your Team closer to the front-lines quicker with your Teleporters, or stop the enemy from advancing with your Dispencer and Sentry Gun.

The Medic. Keep your friends alive with your Medigun for long enough and you get an ÜberCharge to make one of your Teammates temporarily impervious to all damage!

The Sniper. Keep your friends close, and your enemies further away with this class, specialising in long-range engagement, this New Zealander will be popping heads like balloons before the day is done.

The Spy. This class employs deception as his primary tactic, preferring to stick to the shadows or disguise himself as the enemy to get ahead, and possibly back-stab them. Literally. 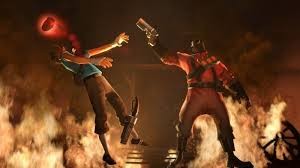 100 Play
With every great Valve game, comes a great amount of customisation as well. Wear anything from a card-board box Robot costume, to a Fedora with it's own personal Storm cloud to stand out in battle. Of course, that means that there are microtransactions, they come in the form of the Mann Co. Store. You can purchase anything from Weapons to Taunts, and Gifts to Keys. That is the trading scene's primary currency, the Key. This golden tool allows you to open Crates, but people mainly use them for trading. For example, a low-tier Unusual could cost anywhere between 10-20 keys, while a god-tier, could be in the thousands of keys.

And, with keys worth approximately $2.50, that, my friend, is a lot of money for an in-game item.