Should you play Trove?

Trove is a voxel based MMO--one of many that will be seen as more Minecraft clones. But, it has its own original twist. Trove focuses combat and class leveling, along with character customization, while Minecraft and similar titles do not display such a focus. When I started Trove two years ago, I didn't know what to expect from such a simplistic game. What I found was one of the most enjoyable and well-rounded RPGs I've ever played.

The first remarkable thing was the travel system. There are currently 5 ways to cover land in Trove. These are by boat, by dragon, by mount, by wing, and by track. These are important to remember, as certain areas of the map are tailored towards one of these methods of travel (such as the ocean, where boats are required, or the Radiant Ruins, where wings or a dragon are needed). 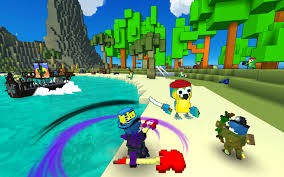 By playing this game you can get 100 Play
Another outstanding feature was the environment's design. Each time you join a game, you will be put into one of a few fully destructible, randomly generated maps with a few other players. These maps have dungeons, huge and small, and themed areas with different scenery. A view from the sky reveals the beauty in the random terrain: There are rivers and fjords snaking through plains, chocolate waterfalls falling from pastel cliffs, and tall, neon towers. These unique environments helped develop a sense of adventure in the open world.

The different character animations, however, are what threw me off. After the beauty of the environments, the clashing of the character models and animations appear jarring. The worst offender was the charge of the "Knight" class, the first class I played (and then mained for two years), a swirling, horizontal tornado. But, visibility is sorely needed in the crowded boss fights in later levels. 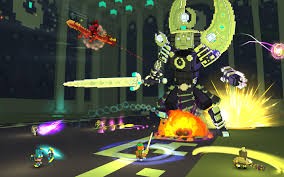 100 Play
The overall best part of this game was the hectic boss battles. The size alone of some of these bosses was enough to make players back out, and their damage output was huge. Imagine twenty players in a room firing off abilities, attacks, and running for their lives. It was an odd experience--but we all learned to get used to it. Grouping up was the best way to fight these huge bosses, especially when they were the top farming spots. You'll only experience true fear once you accidentally pull the aggro of a Weeping Prophet ten times your size.

In all, Trove was one of the best games I've ever played, despite the grinding and frustration. The phenomenal environments and the terrifying boss fights were what kept us all in for the ride. I highly recommend this game to everyone, as long as you know what you're getting into. Thanks for reading!
1915 0 Share
5.0 (2)