Anyone who's played Minecraft or Terraria can vouch for the fact that there's something so charming in the psuedo-retro graphics they have. They're both games that encapsulate their players with promises of endless creation in sandbox like worlds filled with danger. But, they're both lacking one key feature, and that's a proper combat system. Truth be told, many of the voxel/pixel creative type games have lackluster combat systems. Even some of the better ones like Castleminer Z still can be distilled to "Pull the trigger at the bad thing while moving backwards." It's really disappointing too, because combat can be so fun when executed properly, and it allows entire communities to form inside of the game for PvP or PvE experiences.

That's where Trove comes in and really shines. It's got the beloved voxel art style we know from other hit franchises (albeit a bit shinier) and probably the most intuitive and exciting combat of any games of its kind. Whether you're raining hell upon your enemies from above with the gunslinger, smiting them with holy fire as the paladin, or burning them to a crisp with the dracolyte, one thing is certain: you're having fun. Trove did right what so many other games neglected, and that's take the creative elements of Minecraft and put them into a proper RPG shell and flesh out different playstyles. It's like World of Warcraft with blocks.

In Trove, you take on the role of an adventurer that you create in one of many different classes. As soon as you've finished that perfect hairstyle you're dropped into the hub world, where you'll be spending the least amount of time more than likely, because the main use of the hub world is to get to the dungeons. You step through one of a few different portals that take you to a level appropriate, randomly generated world with colorful biomes and even more colorful enemies to destroy. By playing this game you can get 100 Play
As you wander around you'll encounter a couple different types of structures placed around the world. Lairs are small buildings usually consisting of two or three rooms and have enemies guarding them. When you get close enough you'll be tasked with either killing a boss in the final room of the lair or activating a shrine that will summon waves of enemies for you to fight off.

Upon completion you're handsomely rewarded with loot in the form of weapons and armour that you can either use or turn into raw materials. In typical RPG style, better items make you more powerful, and Trove doesn't skimp out on handing them to players like candy. Your inventory will be overflowing with items before you know what to do with them. Luckily, you can turn them into raw materials to upgrade your good gear. As an added bonus, and something World of Warcraft never would let players do, when you turn an item into resources, you unlock it to be equipped as a vanity item that gives the character the appearance of that item regardless of what they're actually using.

Once you've suited up and feel appropriately ready to take on some bigger baddies, head on over to the second type of structure you're likely to encounter in Trove, the dungeon. Dungeons are essentially big, multi-stage Lairs. Usually consisting of three different boss rooms, two lieutenants and one big boss all fit with accompanying entourages. It might be best to get some friends if you're wanting to tackle one of these, because they can really pose a challenge even to the more experienced players.

That's still not the entire story though, as later in the game you'll be encountering Shadow dungeons that offer promises of great fortune on completion but demand strong teamwork from a competent party. Further yet you'll be flying high in the clouds in Sky worlds that boast rare minerals as long as you're willing to fend off an ancient sentinel or two... 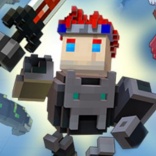 100 Play
Honestly though, I've only really scratched the surface of Trove. It's really a paradise for so many types of gamers. Achievement hunters and collectors alike will pride themselves upon their collections of every cosmetic, weapon, mount and hundreds of other items in the game. Builders will enjoy the Cornerstone, which is a plot of land that can be summoned at set locations throughout the world and allows them to build whatever they desire. Explorers could get lost in the endless caves and sprawling landscapes of the games randomly generated worlds. Finally, if you're like me then the combat will be what keeps you up at night trying to improve. Trove offers some fantastic AI enemies to give you a challenge when you're out earning your sea legs, but PvP combat is where you get to show off your moves. You'll be dropped into arenas that are primarily capture the flag team team games where every class has a chance to shine and the best men will win.

If I haven't said it already in enough ways for you: Trove is a great game. It's got a little something for everyone, and anyone that likes RPGs will absolutely fall in love with it. It's a gem with an extremely active community and a team of developers that really care about the community. I recommend you give it a try just to see what it's about at least. You never know what you might find inside of a Trove after all.
1736 0 Share
5.0 (1)