A Guide to Cuisine Royale weapons 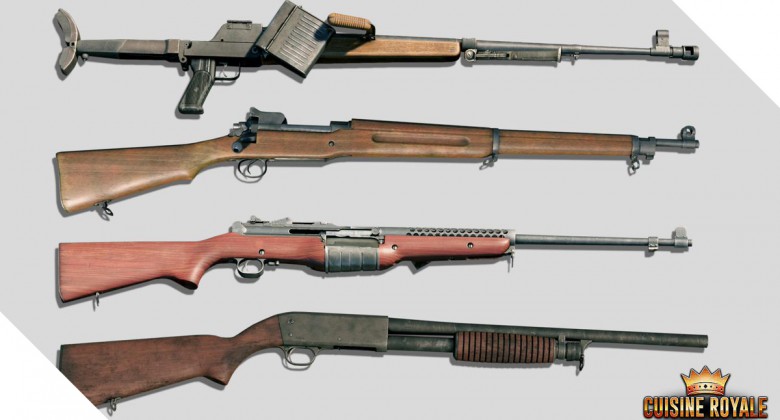 Cuisine Royale is one of the newer Battle Royale games out there. Originally released as an April Fool’s Day expansion for another of the games made by the developers, it soon became so popular they released it as its own game. Featuring a whole host of weapons, some realistic and some which are simply bizarre, combined with the ability to set traps and even have demonic rituals, it’s fast, fun and frenzied. One of the main things that people want to know about are the Cuisine Royale weapons. With a constantly growing list of Cuisine Royale weapons, it can seem really daunting when having to make your choice! So what’s the deal? Read on for a guide to Cuisine Royale weapons.

Knowing the weapons in Cuisine Royale can make or break you in a battle. Different weapons have different capabilities in a fight, so knowing when to use each different type of weapon is really important. Before we dive into this guide to Cuisine Royale weapons, it’s worth knowing that at any given moment, you’re capable of carrying four different kinds of weapon. These are two primary weapons, one secondary weapon and one melee weapon. We’ll take you through each Cuisine Royale weapon category and give you some tips on the best weapons in each.

These Cuisine Royale weapons will be your go-to weapons. You’ll want something that packs a bit of a punch, can reload quickly and easily, and is also accurate – especially if you’re running towards the enemy! Sniper rifles and machine guns are the best ones to have to hand as your primary weapons. Here’s a guide to primary Cuisine Royale weapons.

This machine gun packs a punch, it goes without saying! The magazine holds up to 50 bullets, so it’s ideal for long sprays. It’s not the most accurate gun in the game that’s for sure, and the recoil can be a little tricky to get used to, but if you find a good position, kneel down and open fire. Definitely a Cuisine Royale weapon to have a practice with.

Potentially one of the most versatile primary Cuisine Royale weapons in the game, this little number is a bit of a beast. Effectively an automatic rifle which makes life easy, especially when you find yourself in a shoot-out, the Browning M1918 is ideal for short to medium range firing. The magazine isn’t massive – only 20 rounds – but you can mow down anyone who approaches you in no time.

If you’re looking for an accurate weapon, then best ignore this one! A submachine gun that has a magazine capable of holding an absolutely whopping 70 bullets, this monster is ideal for pointing and spraying. Ideal for those of you who may not be the best shot and need to counter that by using as many bullets as possible to destroy your enemy! Definitely one of the stronger Cuisine Royale weapons for sure.

This pistol is one of the more common ones found in Cuisine Royale. By no stretch of the imagination is this weapon the best secondary weapon, but in a pinch, it can be a life-saver. Holding 8 rounds, it’s super reliable, though does come with a little bit of a kick, so keep an eye on that recoil. A solid and trustworthy addition to the secondary Cuisine Royale weapons.

You’ll be thankful to have this weapon on you when your primary weapons are running low on ammo. With 8 bullets in the magazine, and a barely noticeable recoil, the PO8 Luger is an incredible useful sidearm. Perfect for sneaking up on an enemy and quickly taking them out!

Another pistol that actually comes pretty close to the power and potency of the PO8 Luger. Packing a punch, but with a bit more recoil than the Luger, you could describe it as a combo of the Colt and the Luger. Still, this makes it one of the most reliable and useful secondary Cuisine Royale weapons.

And finally, the last category of Cuisine Royale weapons – the all-important melee weapons! If you’ve completely run out of bullets, then you’re going to have to resort to hand-to-hand fighting. You’ll always start off with a small knife at the beginning of any Cuisine Royale game, which is pretty useless. In the game, you can come across two other melee weapons – the axe and the pan. The pan is pretty rare, so keep your eyes peeled!