An introduction to Clans in World of Tanks 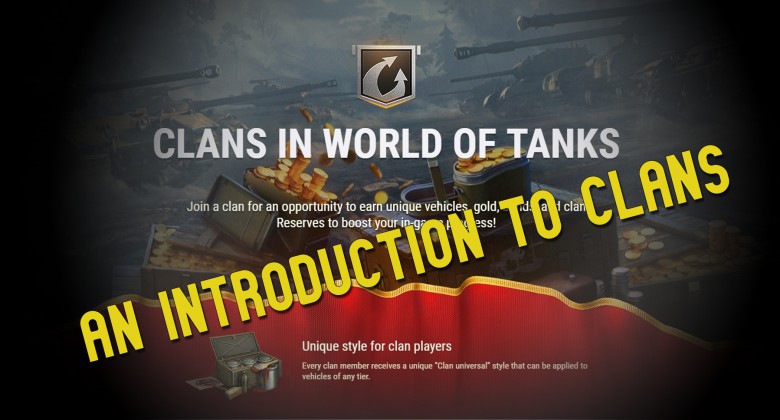 World of Tanks is an online game where you captain and control your own tank of choice. You have a choice of loads of different vehicles, primarily mid-20th Century combat vehicles from the 1930s to the 1960s, with a few more modern vehicles thrown in for good measure. It can be a tricky selection with over 600 vehicles available to you! As the captain of your tank, you control the movement across the battlefield, as well as the various bits of weaponry you have at your disposal. But sometimes, your own weapons are nothing compared to your opponents. This is where the World of Tanks Clans comes into play. Read on for an introduction to Clans in World of Tanks.

What are Clans in World of Tanks?

A Clan is a group of players who have organized themselves into a unit and play frequently together. You can use your clan to compete in Clan Wars and Strongholds for prizes, opening up another avenue in the game. You also have access to special vehicles that are only available to World of Tanks Clans, as well as the opportunity to get in-game gold with each territory you conquer and increased Battle Results Bonuses, depending on the strength of your Stronghold. Clans are a really great way of elevating your experience in World of Tanks, as well as meeting new people and learning all about the gameplay. World of Tanks Clans are a great dimension to the game, offering up a more competitive side of World of Tanks.

What are the benefits of being in a World of Tanks Clan?

There are all sorts of benefits to being in a Clan in World of Tanks. First of all, as we mentioned, there is the fact that you are playing with others. Clans can contain 99 unique members, and usually you’ll join a Clan that features players who are at your skill level. Playing with other people is a really great way of improving as a player, and you can also Platoon with players who are in your Clan as well. Stronghold bonuses are also really good too – when you fight in battles, you can earn industrial resources that can then be turned into bonuses by your commander. Credit and Experience boosts are just two of the benefits you can get from a World of Tanks Clan Stronghold.

How do I get involved with a Clan?

There’s a couple of ways of getting involved with a World of Tanks clan. First of all, you could see if you could join a pre-existing Clan. There are loads of different Clans in World of Tanks to choose from, lots of them being split up between different skill levels, so the best plan of action would be to join a Clan that has players who are at a similar skill level to you. You have to apply to be in a Clan, and sometimes you can get rejected. Don’t be disheartened by this though! Quite often it may be to do with your skill level, so try and find one that is more matched to you. Another way of getting involved in a World of Tanks Clan is to actually create your own one. Creating a clan costs at least 1,000,000 credits though, so it’s a bit of an expensive endeavor! You will become the Commander of the Clan though, and you get to choose the Clan name, motto and description.

Strongholds are where you build your structures for your World of Tanks Clan, and prepare Clan Reserves. Clan Reserves are used to boost the income of the Clan members. You’ll get a Stronghold as soon as the Clan is created, so it doesn’t really matter how many players or battles you’ve got involved with, as you can still create a powerful Stronghold and get all the bonuses from your Clan Reserves from day one. There are also Stronghold competitions called War Games where you can earn gold and even more Clan Reserves – so it’s really important to keep your Stronghold in good shape.

If you’re looking for global domination, then you’ll want to get involved in the Clan Wars! You can enter into the global map and battle with top players, earn gold and receive awards for your successes. It’s also in this sphere that you will get more in-game gold and unlock unique vehicles. So if you want to take over the world and prove yourself as a World of Tanks Clan to be reckoned with, get involved in the Clan Wars!

Tying up the loose ends

So there’s a an introduction to Clans in World of Tanks. It’s a really great in-game way of partnering up with your friends, and even making new ones, plus there’s no better way to get to grips with the game either. With 11 different roles in a Clan, why not start working up the ranks and becoming the commander?