An introduction to War Thunder Squadrons 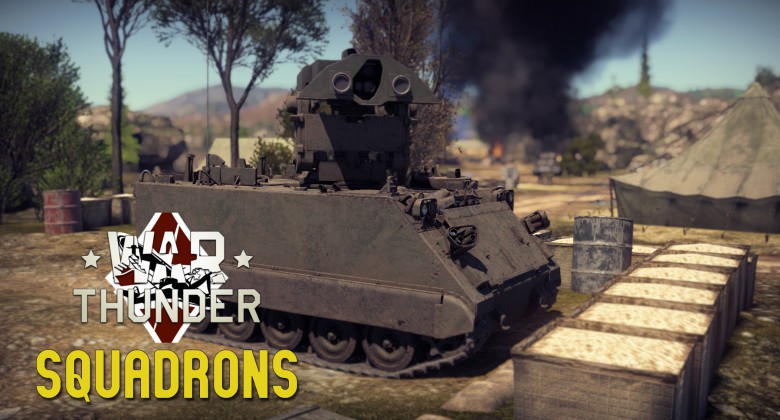 War Thunder is a multiplayer historic vehicle combat game. Originally released in 2012, the game was originally created to be a ‘flying simulation game’ but quickly expanded to ground and sea vehicles. It is one of the most played games on Steam, clocking in 25,000 concurrent players and a grand total of over 15 million players. Infamous for having over 2,000 playable vehicles, and for having realistic and playable historical battles, War Thunder has loads of fun elements for both solo player and multiplayer. One of the best ways to play War Thunder is by joining or creating a Squadron. We take a look at Squadrons and give you an introduction to War Thunder Squadrons.

What are War Thunder Squadrons?

Squadrons are groups that form in the game, gathering several players together to participate in cooperative fights. These can include both tournaments in which Squadrons participate in and fights just for fun. War Thunder Squadrons are all united under a common tag and a selected name. With War Thunder being primarily a team-focused game, getting a War Thunder Squadron together with either old friends or perhaps new friends can change your gaming experience and teach you how to play efficiently in a group.

Deputies are the second-highest rank in War Thunder Squadrons. Like the Commanders, they can use the chat, moderate the chat, blacklist and dismiss players, help with applications, and promote or demote players in the Squadron.

Officers are the third rank in a standard War Thunder Squadron. They don’t have as many functions available to them as either Deputies or Commanders, but they are able to use the Squadron chat, moderate the chat, blacklist players, help with managing applications, and dismissing players too.

Private is the fourth and final rank in the War Thunder Squadrons. In comparison to Commanders, Deputies, and Officers, Privates don’t have any management functions available to them. The only thing they can do is use the chat – but if you are loyal and help the Squadron you’re in, then you could get promoted by the Commander or a Deputy!

Each of the War Thunder Squadrons gets their own set of statistics as they battle their way through the game. These Squadron statistics are collected primarily from four basic parameters. These are the number of air vehicles destroyed, the number of ground or naval vehicles destroyed, the total number of deaths in battle, and a tally of how much time you have spent playing the game. These statistics will determine where each Squadron is located on the leaderboard.

That’s an introduction to War Thunder Squadrons. There are a few prohibitions, which are fairly standard (be nice to each other, for example!), but other than that, being in a Squadron is a really great way to play War Thunder. You often find yourself in strong bonds with those other players in your War Thunder Squadrons, as you are fighting side-by-side, sharing both the victories and the defeats.