An introduction to War Thunder vehicles 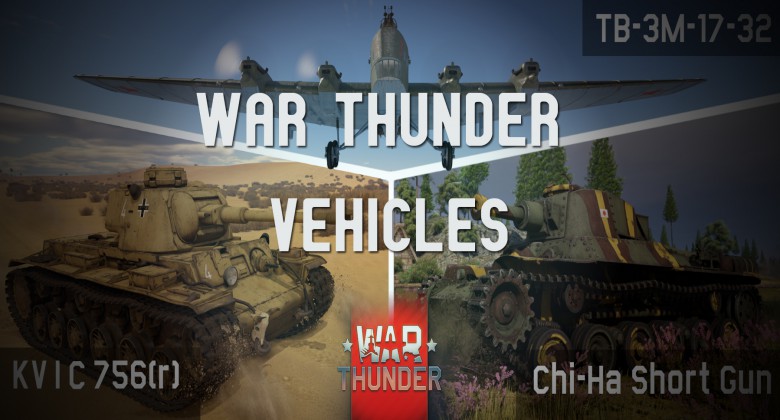 War Thunder is a multiplayer combat video game. Released in 2013, the game was developed as a ‘flying simulation game’ that has now expanded to ground and sea vehicles. The vehicles in the game are primarily from the interwar period and World War II vehicles. As the player, you control aircraft, ground vehicles, and warships from a variety of nations, the major ones being the USA, Britain, Japan, Germany, and the USSR. You can play in a variety of different modes, including Arcade Battles, Realistic Battles, and Custom Battles. The playable War Thunder vehicles are divided between the categories of Fleet, Ground, and Aviation. Aviation is restricted solely to aircraft, whereas Fleet and Ground have their respective warships and ground vehicles along with aircraft, such as helicopters for Ground forces. With nearly 2,000 playable War Thunder vehicles, it can seem like an overwhelming choice. Here, we give you an introduction to War Thunder vehicles.

There are 848 different aircraft that have been released in War Thunder. You can choose between nine different nationalities to play as – USA, Germany, USSR, Great Britain, Japan, China, Italy, France, and Sweden. Within each of these, the aircraft categories are split up into types of aircraft. The types of aircraft available as a playable War Thunder vehicle are split between Fighters, Twin-engine Fighters, Attackers, Bombers, Jet Aircraft, Helicopters, and Premium Aircraft. You start off with your vehicle at the First Rank, and over time you can upgrade to the Sixth Rank. The developers, Gaijin Entertainment, host a special event every year on April Fool’s Day, where they introduce a rogue or unconventional element into the game. For instance, in 2019, they released a map where the players could pilot UFOs!

There are 667 different Ground force War Thunder vehicles that have been released to date. Again, you can choose between the nine playable nations, and then you can choose between several different types of War Thunder ground vehicles. These are split between Light Tanks, Medium Tanks, Heavy Tanks, Tank Destroyers, Anti-aircraft Vehicles, and Premium Vehicles. Ground force vehicles go from First Rank through to Seventh Rank by upgrading. Each year the game developers, Gaijin Entertainment, like to release unusual additions to the game on April Fool’s Day. Each year they switch between the different War Thunder vehicle categories, and memorably, in 2015, they offered players the chance to use rubber tanks firing potatoes and carrots!

Only 115 distinct Fleet class War Thunder vehicles have entered the game – so a little bit more manageable than Ground and Aviation! You can only choose Fleet vehicles from Britain, Germany, the USA, Japan, Italy, and the USSR; however – Swedish and French Fleet vehicles haven’t been developed just yet. The sub-categories present in Fleet War Thunder vehicles are Barges, Boats, Sub-chasers, Destroyers, Cruisers, and Premium Ships. As with the other War Thunder vehicle categories, you move up through the Ranks – from First Rank to Fifth Rank. And as with Aviation and Ground vehicle characters, the developers like to have a bit of fun every year, creating environments or introducing whacky vehicles to the game. This usually happens on April Fool’s Day, and is quite a hotly-anticipated day for fans of the game! The year that they decided Fleet vehicles would come under scrutiny, they introduced a totally underwater map where you could play using submarines. A few years before that, they had a modification where they had playable sailing ships of the 18th Century, battling it out in the Caribbean!

So that’s a very basic introduction to War Thunder vehicles. There are several thousand of them, split between land, air, and sea, so making the right decision can be tricky. There are all sorts of stats you have to consider when choosing, and you also can make a specialization into your style of battle too. With the choice of single-player mode, where you focus on historical settings, and cooperative/multiplayer mode, this game can be enjoyed with or without friends. With over 25,000 concurrent players and 15 million players in total, War Thunder is among one of the most played games on Steam.