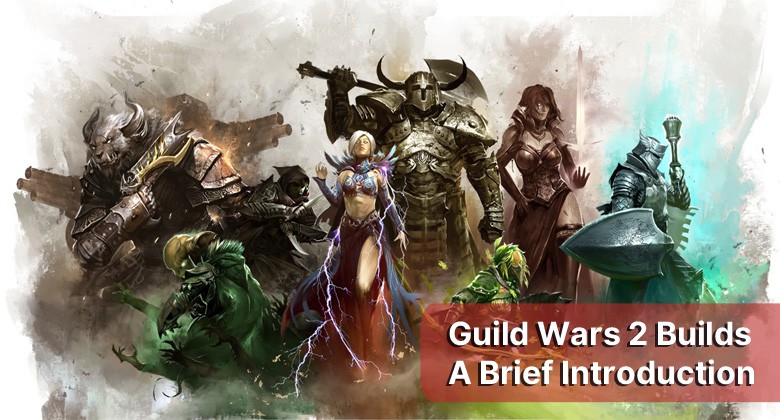 Guild Wars 2 first launched back in 2012. It was considered by many to be a potential rival to World of Warcraft, by far the most popular MMO to date. Although it didn’t quite make good on that potential, it still has an active user base and receives regular updates. The game has changed considerably since it launched, with new elements, refinements and changes being added. However, one thing has remained consistent – players need to come up with a character build that works for them. So, we take a look at Guild Wars 2 builds and what they mean for newcomers to the game.

Guild Wars 2 Builds – What Do We Mean?

As we explored in a separate guide on Guild Wars 2 classes and races, your class (or profession) determines a lot about your gameplay experience. There are three main profession categories within the game. Light armored Scholars, medium armored Adventures, and heavily armored Soldiers.

Each category has three professions in them, for a total of nine different ones in the game. Additionally, there are two elite professions for each basic one, available once you hit level 80. New players can choose a profession that suits their style of play.

As well as determining the type of stats, appearance, and proficiencies, professions also dictate what kind of role your character will have. So, Soldier classes will be best-suited to holding the line of attack, while Scholars will deal damage from afar.

Each profession has a task or set of tasks they excel at. As such, your choices when it comes to skills, weapons and armor can all impact how effective your character is. Add in the fact that different in-game situations require different approaches, and it becomes a fine art.

Guild Wars 2 builds are ways of setting up your character so that they can perform optimally in battle.

To get a detailed understanding of exactly what this entails, it’s a good idea to look at some examples. Remember, there are a variety of different situations you may encounter, so your build will depend on what particular activity you’re doing. For example:

So, those are some scenarios, but how about different classes? Here are some Guild Wars 2 build examples:

Warriors can be a hugely rewarding class to play in Guild Wars 2. They can be fast and lethal, soaking up the damage as they cut through enemies. One approach to creating a build is to have a range of weapons and abilities equipped, cycling through them quickly. This helps you deal the most amount of damage in the shortest amount of time. For example:

Add some healing skills like Blood Reckoning and utility ones like Shattering Blow and you’ll soon be tanking your way to glory.

The Necromancer is one of the most popular classes in the game. It’s not hard to see why either. They can be some of the best support classes in PvP mode, and can self-heal effectively. Your goal with this build is to de-buff your enemies and support your team.

You can also add Sand Flare for healing, and if you’re using a Staff, Necrotic Grasp is useful.

Rangers rely on their bows and their animals to be effective in combat. They can generate a huge amount of damage in a short space of time, and buff themselves to maximize damage output. For this build, a Soulbeast build is very effective:

So, that’s a very brief introduction to why Guild Wars 2 builds are important and what they look like. As you play thought the game and get used to your character, you’ll soon see where you’re most effective. Play around with different builds and find one that works for you.