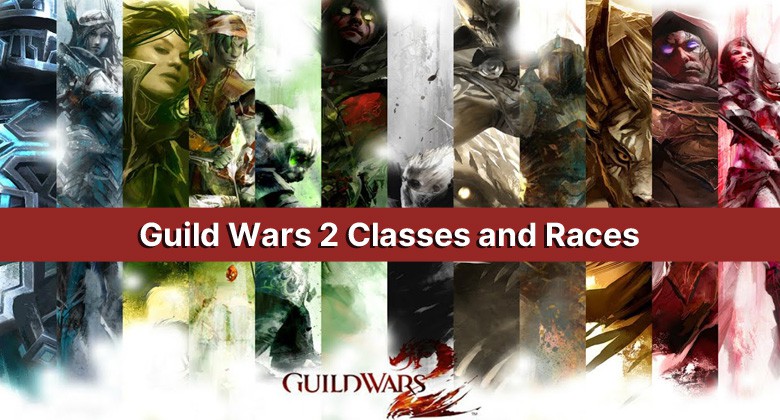 ArenaNet’s massively multiplayer online role-playing game Guild Wars 2 launched back in 2012. It was seen as a contender to the MMO throne that has long been occupied by World of Warcraft. And, with its beautiful visuals, engaging story, and fluid combat, there’s certainly a lot to appreciate. Over the years, the game has grown and developed, and it still has an active player base of around 1.5 million. So, there’s still plenty of reason to jump in and start playing. Before you create a new character, it’s worth knowing about the Guild Wars 2 classes and races. That’s exactly what we’re focusing on in this post.

Guild Wars 2 Classes and Races – Why Do They Matter?

If you’re familiar with role-playing games, you’ll know that your character is at the heart of everything you do. The aim is that you embody your character, making choices for them about their actions and how they make progress.

So, from a purely aesthetic point of view, your class and race determines how your character looks, how they animate, and how they fit into the world. This alone is enough reason to give some thought to what kind of character you want to make.

There is a more substantial reason, however. Your race and class determine the stats you start with. Some races have abilities that others don’t, while some classes are better at some things than others. This directly impacts how your gaming experience pans out.

When it comes to Guild Wars 2 classes and races, there are other elements to consider. The main one is that your Personal Story, the main crux of the game, will vary greatly depending on the choices you make when creating your character.

Let’s start by looking at the available races in the game. There are five playable ones in Guild Wars 2, and it’s the first choice you’ll make when creating a character.

As well as determining what your character will look like, it also affects where you start in the game, your racial skills, and the lore in your background. Here’s a quick summary of each of the races:

As well as choosing a race for your character, you’ll also need to choose a gender. However, only male and female options are available. This choice doesn’t affect gameplay, and is purely aesthetic.

After you’ve chosen and race and gender, the next step of creating your Guild Wars 2 character is to choose a class. In fact, the game refers to classes as professions, but they’re very much the same thing.

Classes in Guild Wars 2 are separated into three different categories, with three sub-categories in each:

These professions rely on their intelligence and magic abilities. They can only wear light armor, making them vulnerable in close-quarters. The three professions are:

Adventurers use a different set of skills entirely, often combining elements of physical and mental skills to perfect their arts. The can wear medium armor:

The hardiest of the classes are soldiers, who rely on strength to fight and protect. They can use heavy armor: