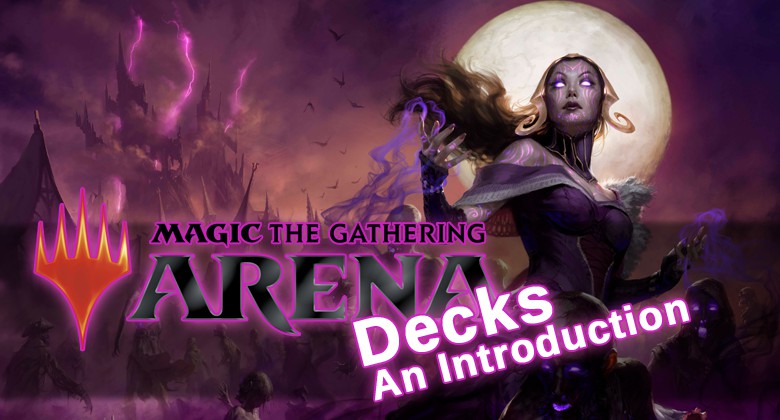 Magic: The Gathering Arena is a strategy collectible card game for PC, based on the hugely popular card game of the same name. It’s a free to play title that gives players the chance to gain cards via in-game achievements, booster packs, and microtransactions. Magic: The Gathering Arena decks are the collections of a player’s cards, and they determine how a player approaches different games. We take a look at the importance of MTG Arena decks and outline some of the popular ones out there at the moment.

MTG Arena follows the set of rules as its physical counterpart. Players use a deck of cards that they’ve pre-selected to battle against other players. Within their decks, there are land cards that generate mana, and cards that consume mana to summon creatures, cast spells, and activate other effects.

There are two main game modes – Draft Play and Constructed Deck Play. In Draft Play, each player is given a selection of booster packs to build their own deck from. They then take on as many matches as they can with the deck. In Constructed Play, players get a library of pre-made decks and base cards, which they can improve over time.

There are many cards within the white angel deck, and you can choose from all kinds of different offensive and defensive cards. Here is an example of some of the cards within the Magic: The Gathering Arena Angel Deck:

A Magic: The Gathering Arena Artifact Deck is a popular choice with many players. Some of the top cards you might consider are:

The Magic: The Gathering Arena Mono-Blue Tempo Deck is also a strong choice of deck. Keep an eye out for cards such as:

Diamond Mare. When playing this card, a Diamond Mare enters the battlefield, allowing you to choose a colour. Whenever you cast a spell of the chosen colour, you gain 1 life.

One of the most appealing aspects of MTG: Arena is that you can come up with all kinds of different builds depending on your playstyle. With a Magic: The Gathering Arena Deck Builder, you can look at various different decks and cards to come up with hypothetical builds. From here, you can work your way to achieving such a goal.

You can start playing MGT: Arena for free, and a deck builder is a great way of deciding whether you want to pay to get new cards and booster packs.