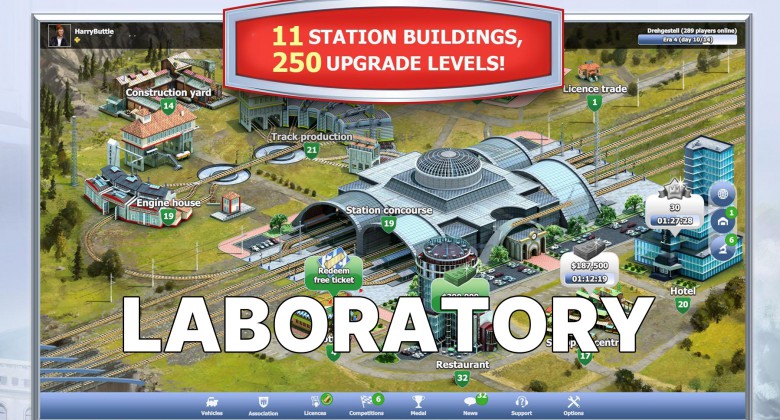 Rail Nation is an online railway strategy game that has been around since 2013. For the millions of railway fanatics found around the world, as well as the discerning game enthusiast, Rail Nation provides all interested strategy gamers the chance to start their own railway company. You can manage transport systems and team up with associations to spread your rail empire far and wide.

The main aim of the game is to collect as many prestige points as you can. There are many different ways of doing this, such as running goods, investing in industries, or completing competitions. Teamwork is key in the game, with your own success depending on how well you cooperate with other players and cities in your territory. There are six ‘era’ which last for 14 days in real-time, with fifty different cities fighting it out to make it to the end. By the end of the sixth era, the top ten cities go on to the endgame, and the final victor is the city that sends all the goods.

When you first log in, you have to create an avatar and select which city you start in. We recommend you choose a city that has the least players in it - but feel free to choose from the list! You’ll then go through a tutorial that will lay out all the basics of the game and get you primed and ready to take the rail world by storm.

You don’t just start with a simple railway station, however. There are eleven different buildings that are a part of your rail empire - License Trade, Bank, Construction Yard, Track Production, Engine House, Station Concourse, Hotel, Restaurant, Shopping Centre, Lottery, and Laboratory. All of these buildings are really important in Rail Nation, and can help you expand and advance your rail empire. We’re going to focus on one of the more important buildings in Rail Nation - the Laboratory. Read on to find out about the Rail Nation Laboratory.

Below is a table showing the time in minutes that it takes to generate one Research Point (RP), as well as the maximum number of Research Points you can store, the cost of upgrading and the base time for upgrading and also the Prestige Points you get from upgrading to this level. As we mentioned earlier in this article, Prestige Points pretty much determine the winner of the game, so you want to get as many of these as you can!

The Laboratory level in Rail Nation goes all the way up to 25, but this handy table gives you a good idea of timings and RP generation for starters.

Recently, Rail Nation developed the idea of a ‘split’ Laboratory. This would basically mean you have 2 laboratories in essence, and it would be up to you to decide whether you use this for speeding up research and increasing the frequency of RP production, or increasing the maximum storage for RP. So that’s some really handy information about the Rail Nation Laboratory. A really useful building to keep upgraded, it can really benefit your track in lots of different ways - from faster engines through to those precious Prestige Points.