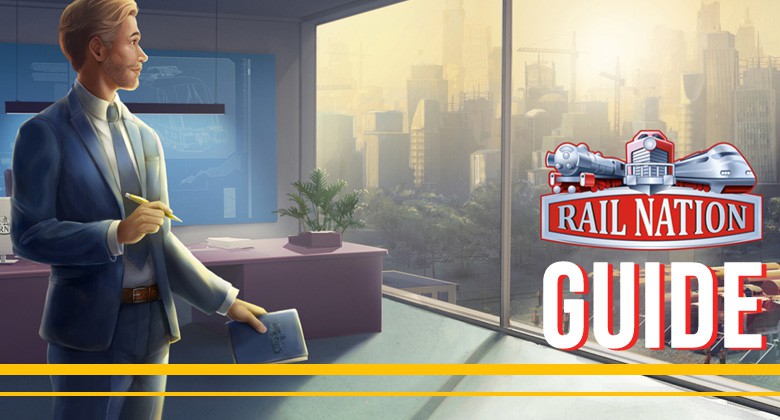 As any modern gamer knows, there are thousands of games out there vying for attention. Amongst Steam sales, Humble Bundle deals, and free-to-play games, it can be hard to know where to start. When you do find a title to get stuck into, the last thing you need is to spend ages figuring out how it all works. With games like Rail Nation that have many different elements to master, it can be off-putting. However, if you were to find a Rail Nation guide, you’d get a head start. Luckily for you, you’ve found exactly that.

So, you want to start your own successful rail company? You’ve come to the right place, or rather, you’ve chosen the right game. Rail Nation is a game about creating, managing, and making a success of a vast rail network. The game is available to play for free on iOS, Android, and in most web browsers.

With over 3 million players globally, across 19 languages, the game has been a firm success. Players must team up, as well as compete against each other, in order to be successful. Games are typically played over 1.5 – 3 months, with various rounds (epochs) in each game. As such, it requires quite a big time investment if you want to win.

First things first, you’ll need to get set up with an account and choose a server. First, you’ll have to go over to the official Rail Nation website and register with your email address. You’ll have to fill out some basic information and then choose a password. Once you’re account is set up, you can log in. If you’re playing on mobile, you can do all this through the app once you download it.

Next, you must pick a server to play on. You’ll find that there are several servers available, mainly based around the language there in. There is also an international server where you’ll find all kinds of languages. You’ll likely want to choose a server that’s just started (in its first epoch). This way, you can establish yourself in the game.

Finally, you’ll need to select an avatar and the city you wish to start in. The game automatically recommends the city with the fewest players in. Again, this is so you can make your mark. However, the choice is yours.

At this point, the game is fairly good at guiding you through the main mechanics of the game. There are several tutorial missions you can play, each which teaches you new elements and rewards you with various prizes.

We’ve outlined the various steps of the tutorial:

Now that you have the basics of the game down, it’s time to continue with some of the tutorial missions. Again, each of these will reward you with money and prestige. These are essential for progressing through the game past the tutorial.

Upgrade your station. First, navigate to the Train Station tab in your menu. There are several buildings here which you can add and upgrade to bring advantages. For example, by increasing the level of your Engine House, you can store more engines and make more money. To upgrade it, select the building and click on ‘Upgrade’ to start construction. You’ll see a countdown for how long it takes to complete. As a reward, you’ll get another Swallow and two coal waggons.

Research upgrades. Research can get you some new technologies. These are essential for upgrading your engines and earning more money. Click on the ‘Research’ tab in the menu and bring up the technology tree. Here, there will be various technologies you can research in your current era. You can research the Superheated steam first, which takes research points.

Install upgrades. Once your research project has completed, you’ll need to install your upgrade. To do so, open your list of vehicles and select an engine. From here, you can click on the ‘Upgrade’ button to install one of the listed upgrades. Simple!

So far, we’ve covered the very basics of Rail Nation. As you can see, there’s quite a lot of depth to the game, as well as many mechanics to master. You’ll need to progress each of these areas if you’re to be successful, which can take time and patience.

In a separate guide, we covered Rail Nation hacks. You may be tempted to turn to cheats to try and get an advantage in the game. We don’t recommend this approach at all. Instead, you should play though and enjoy the game as much as possible.