A Beginner's Guide to Skyforge 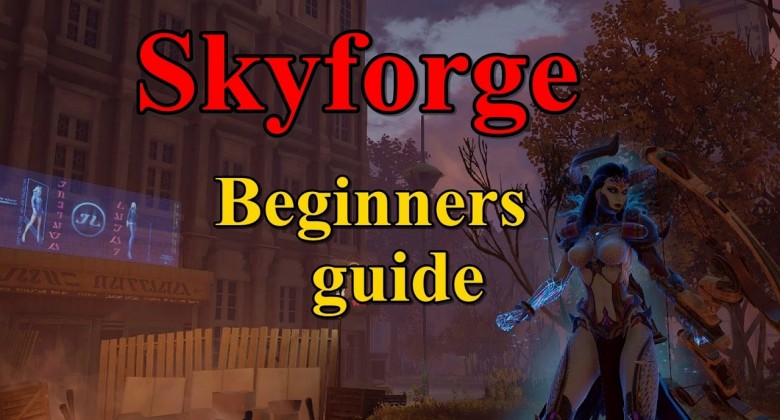 So, you’ve decided to become an immortal in the world of Skyforge, huh? Well, I guess you don’t get to “choose” to be immortal; it just happens to you.  Regardless, you will be a valuable asset in the fight against the Reaper of Death and his Virds. You will need all of the help you can get to fight against this scourge and eventually reach godhood. 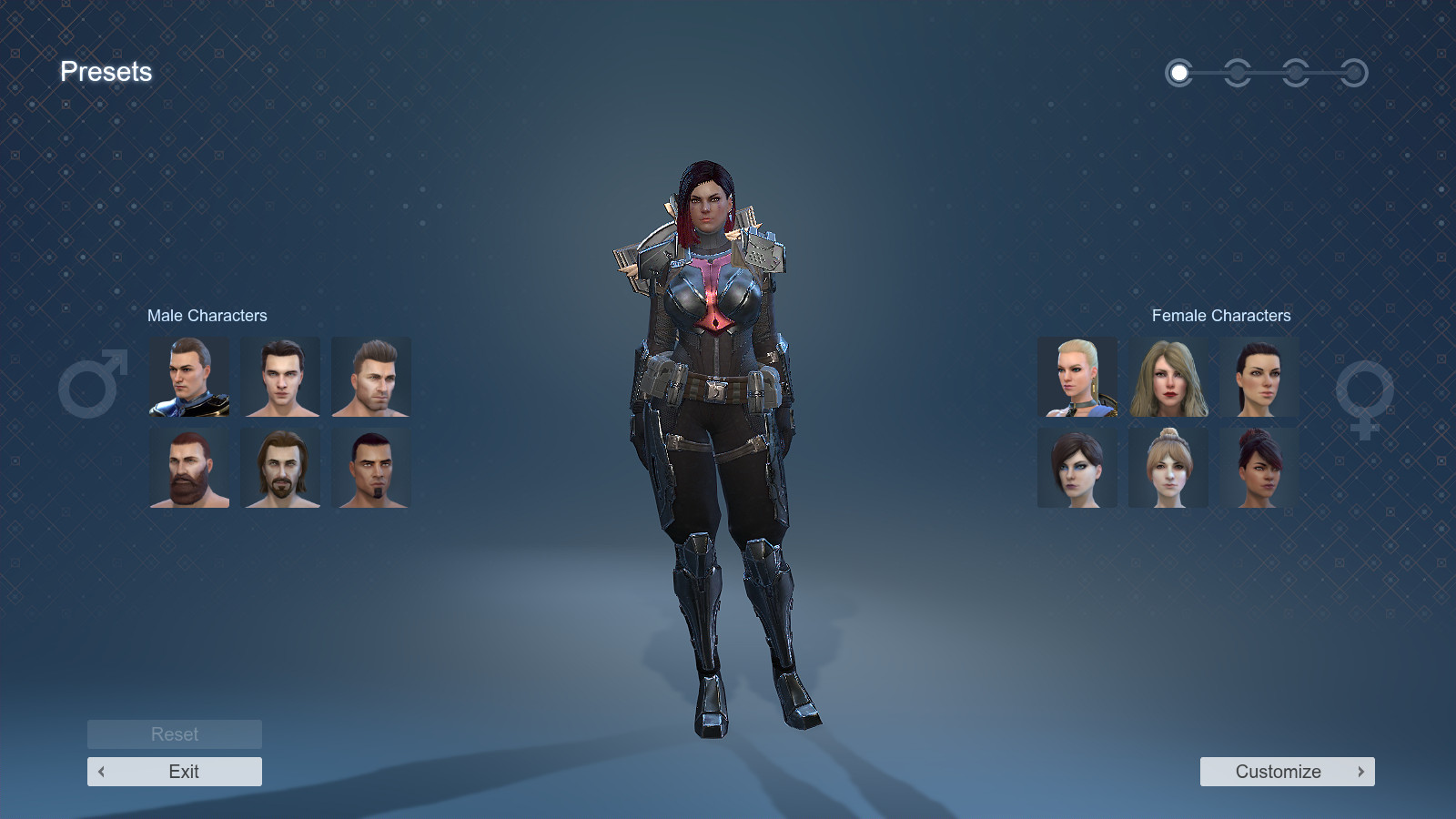 The game is controlled through keyboard and mouse.  WASD moves your character while the mouse controls the camera.  The game also has support for a controller. Whichever control option you chose, you will be able to change settings to your liking; however, keyboard and mouse is much more flexible.  Characters can jump, dash, and attack.

Combat in this game works very much like your typical console hack ‘n slash.  Your main way of attacking will be to use light and heavy attacks, called Combo Attack #1 and Combo Attack #2 respectively.  You can chain light attacks together, and end your combo with a heavy. 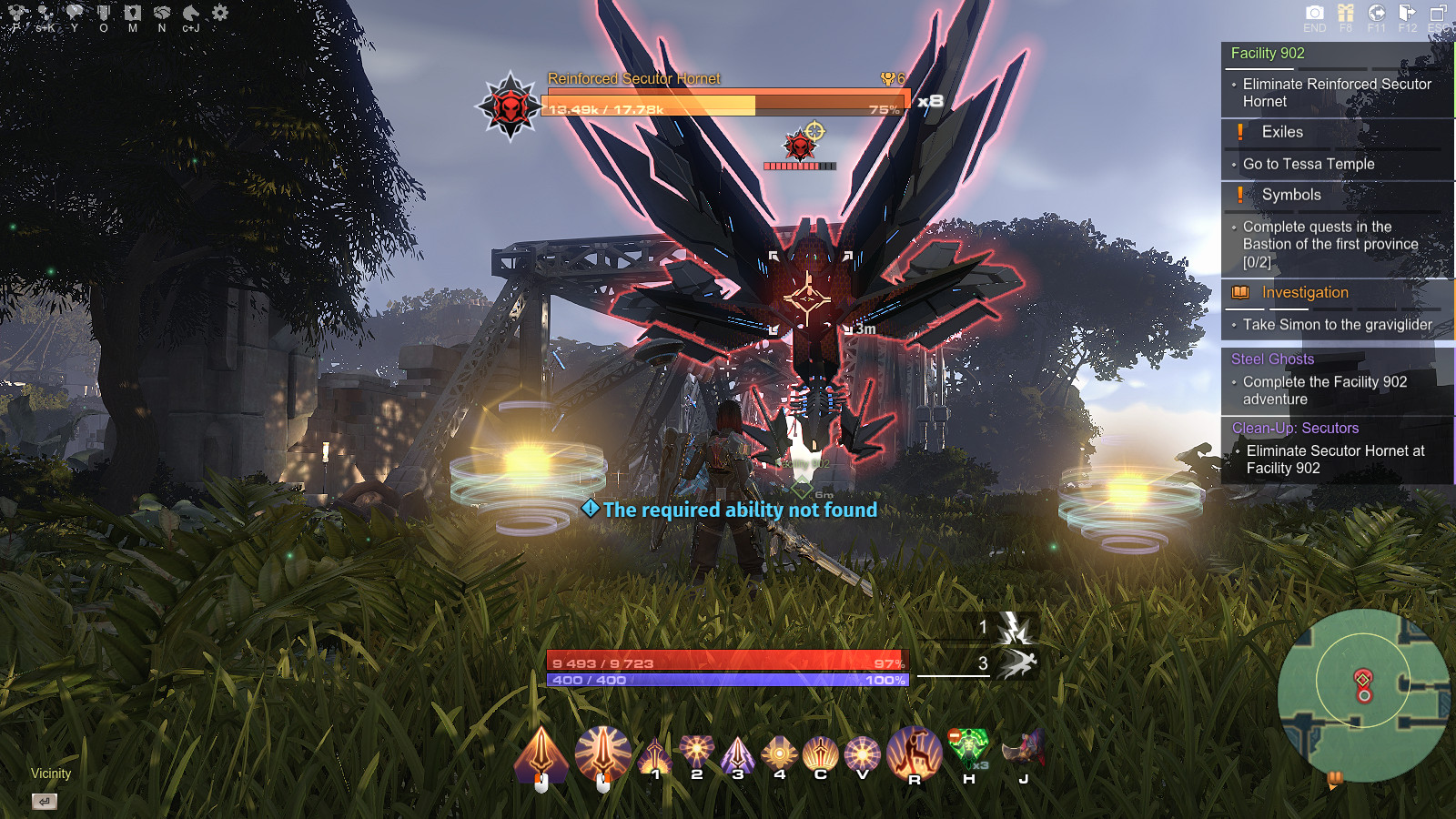 Each class also has a mana bar underneath their health bar that is used by some of your skills.  There is a specific name for this mana bar depending on your class, but they each function the same.  Your strong attacks and Abilities consume a certain amount of mana, while light attacks will replenish it.  When you nearly deplete all of your enemies health, you will be given an option to perform a Finishing Attack by pressing the “E” key that will kill the enemy.  Each class will all have other unique ways to use Abilities to follow up on their combo attacks.

Combat is all about managing how you use your attacks and abilities to take down challenges efficiently. You also have the ability to lock-on to a target, which will be helpful in one-on-one battles where you will have to jump and dash out of the way of enemy attacks.

After you complete the tutorial, you will be able to choose a class for your character.  Of the 15 classes, only 3 are available from the offset: Cryomancer, Paladin, and Lightbinder.  As you progress through the story, you will come across Temples on the map. Every class has their own temple, and can be unlocked by using Sparks to purchase them.  You can always change your character’s class whenever you want, so experiment and choose the best class that suits you. 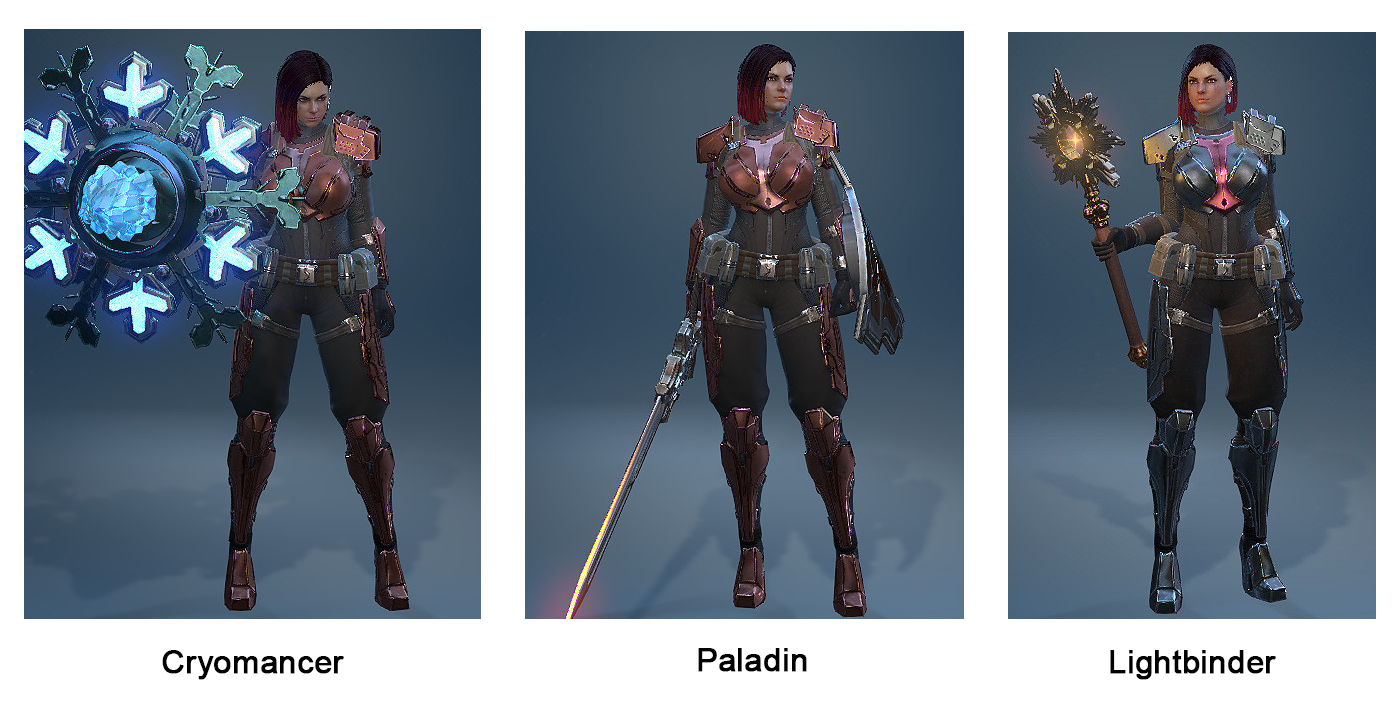 Classes can be differentiated between three roles: Damage, Tank, and Support.  Damage makes up a majority of the classes, and also has its own sub-categories: Energy, Melee, and Ranged.

The Damage classes are:

The Tank classes are:

Finally, the Support classes are:

You can interact with the environment and people by pressing the Spacebar on the keyboard.  Pressing Space Bar can also automatically move your character to certain quest locations. Just move the reticle to a quest marker and press the Spacebar to move towards that marker.

Players have a chat and emotes that they can use to communicate and express themselves.  Pressing “G” brings up a menu that will allow players to do these things. Players can also join guilds called Pantheons so that they may find friends and allies to do group missions with. 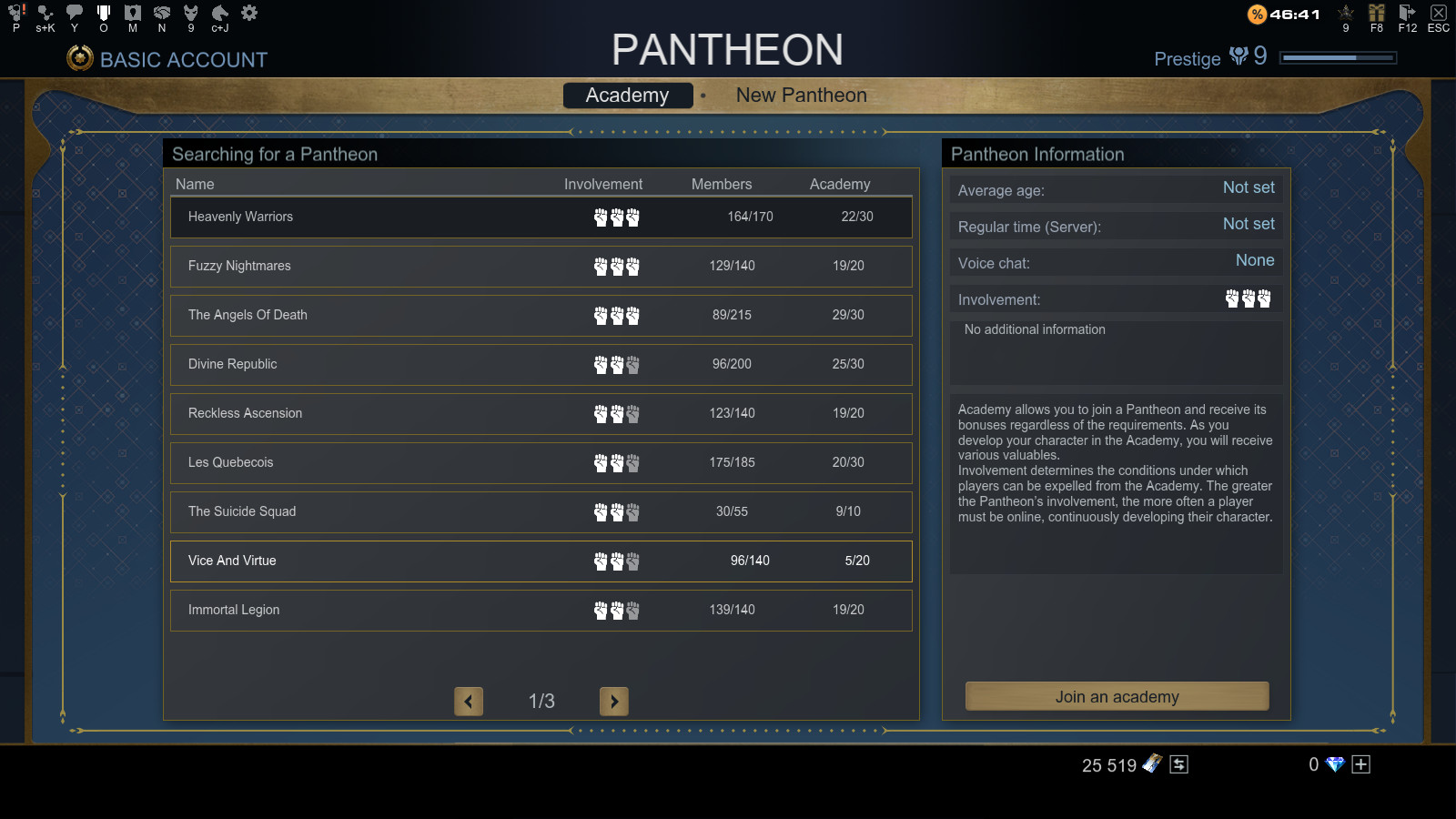 There are 3 main areas in the Hub World that the player may travel to: The Divine Observatory, Research Center, and Park.  The Divine Observatory is where players may manually continue the games storyline, while the Research Center has the Training Room where players may test out their skills and classes outside of quests as well as the ability to change the appearance of your character, including gender. 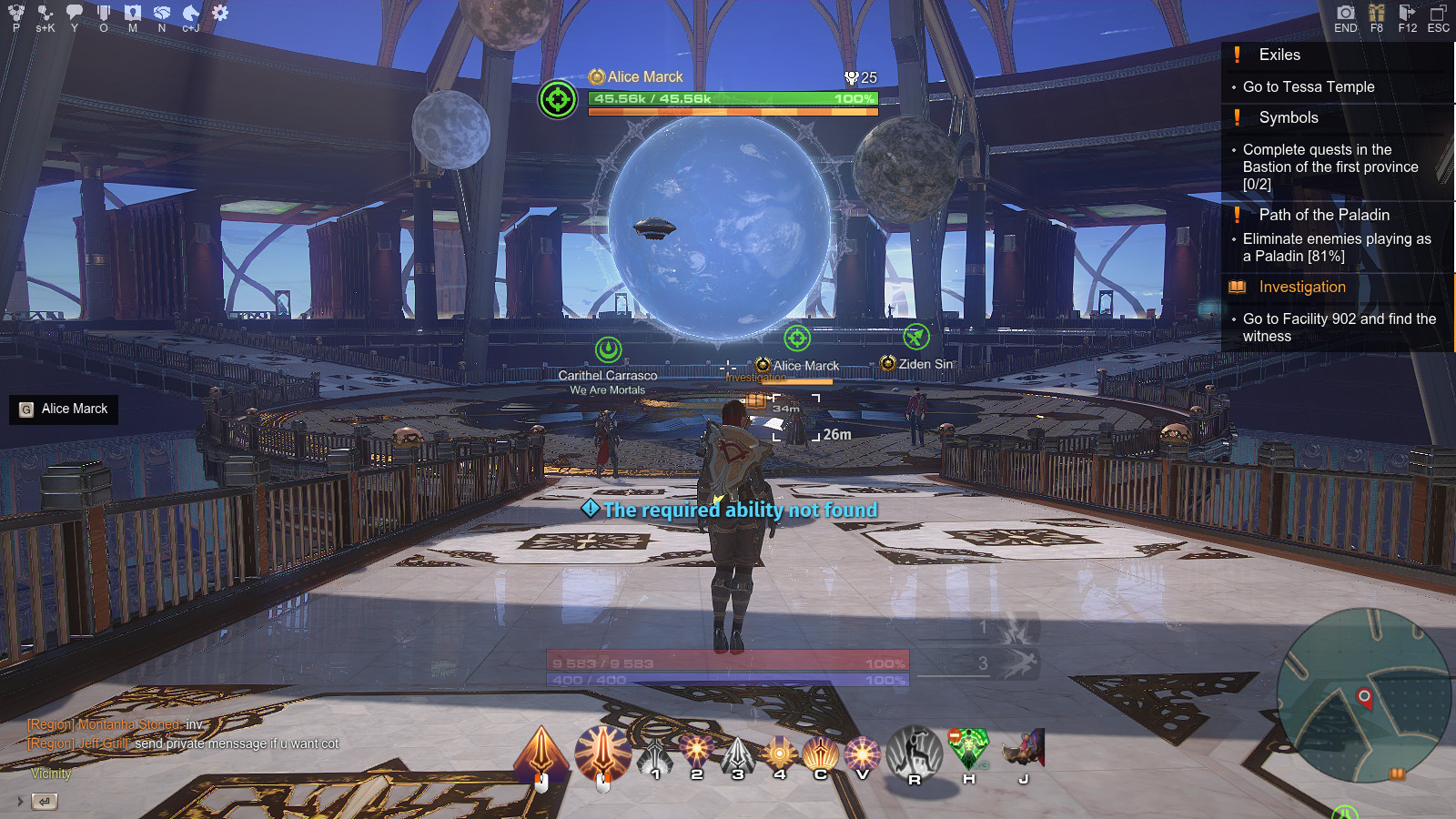 Mounts are also available in Skyforge.  Some are available through missions while most must be purchased through Skyforge’s Market.  You can have multiple mounts, and to select between mounts, just hold J to bring up the Mount Menu and select the mount you want.  Mounts can be called quickly by pressing J. Mounts cannot be ridden during combat.

Pressing “K” opens up the Campaign map which lets you go on your next Adventure.  Things like the Tower of Knowledge and Cathedrals can also be accessed here, as well as Class Temples and Bastions. 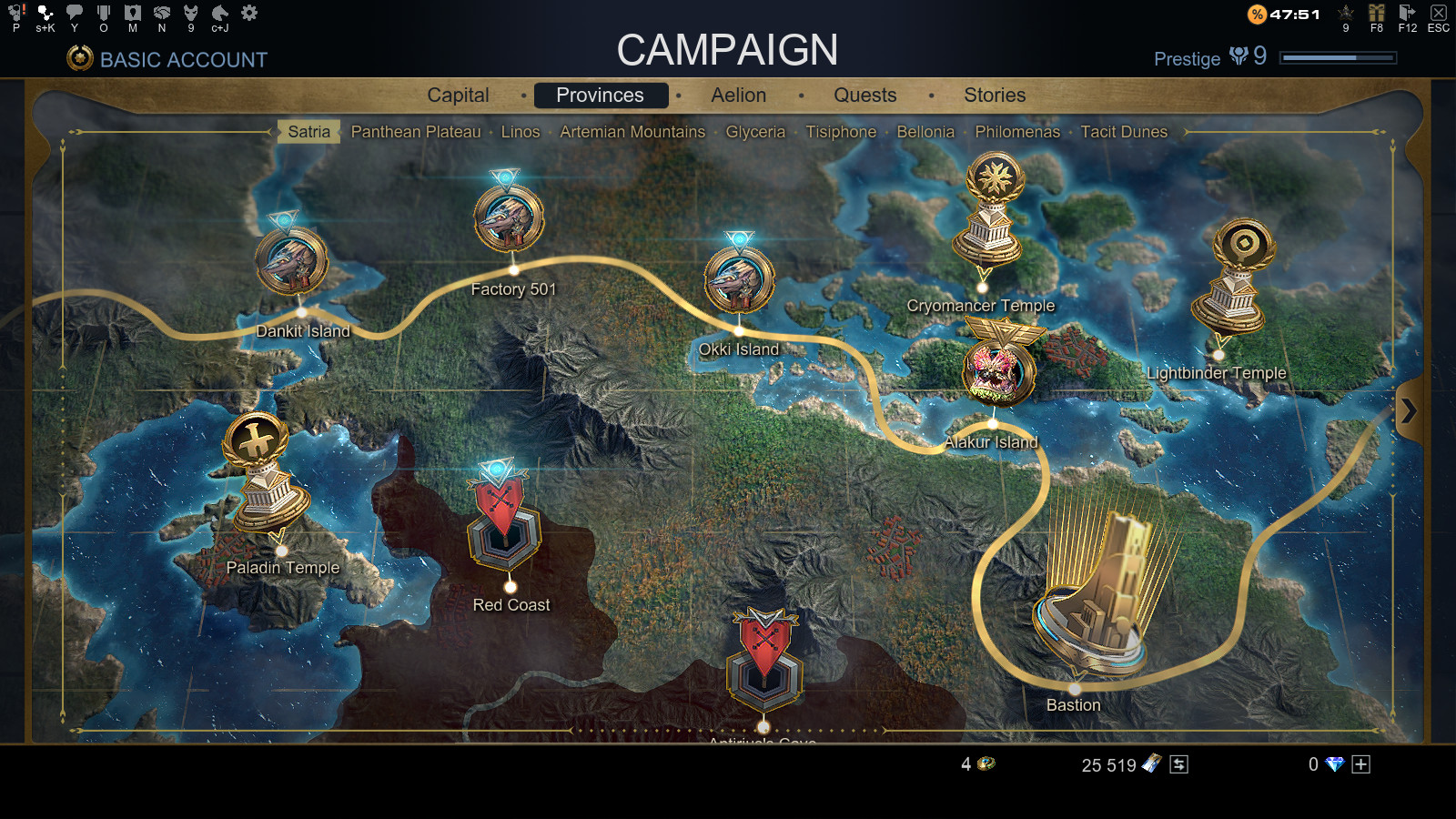 All classes have the same equipment layout.  Equipment includes a Main Weapon; an Artifact; Jewelry, which is split into 4 distinct slots -- ring, amulet, brooch, and bracelet -- and Gems of Power, which are also split into 4 slots for 4 different types -- Sapphire, Ruby, Emerald, and Topaz.  Each class has their own unique weapon, but Artifacts, Jewelry, and Gems of Power can be shared between classes if you decide to change classes.

Your Equipment adds modifiers to your characters that increase things like damage output or health.  Equipment also has rarity tiers, and are categorized by color. These are -- by increasing rarity -- Green(normal), Blue(rare), Purple(epic), Yellow(mystical), and Orange(legendary).  The more rare the equipment is, the better the stat modifiers on it. 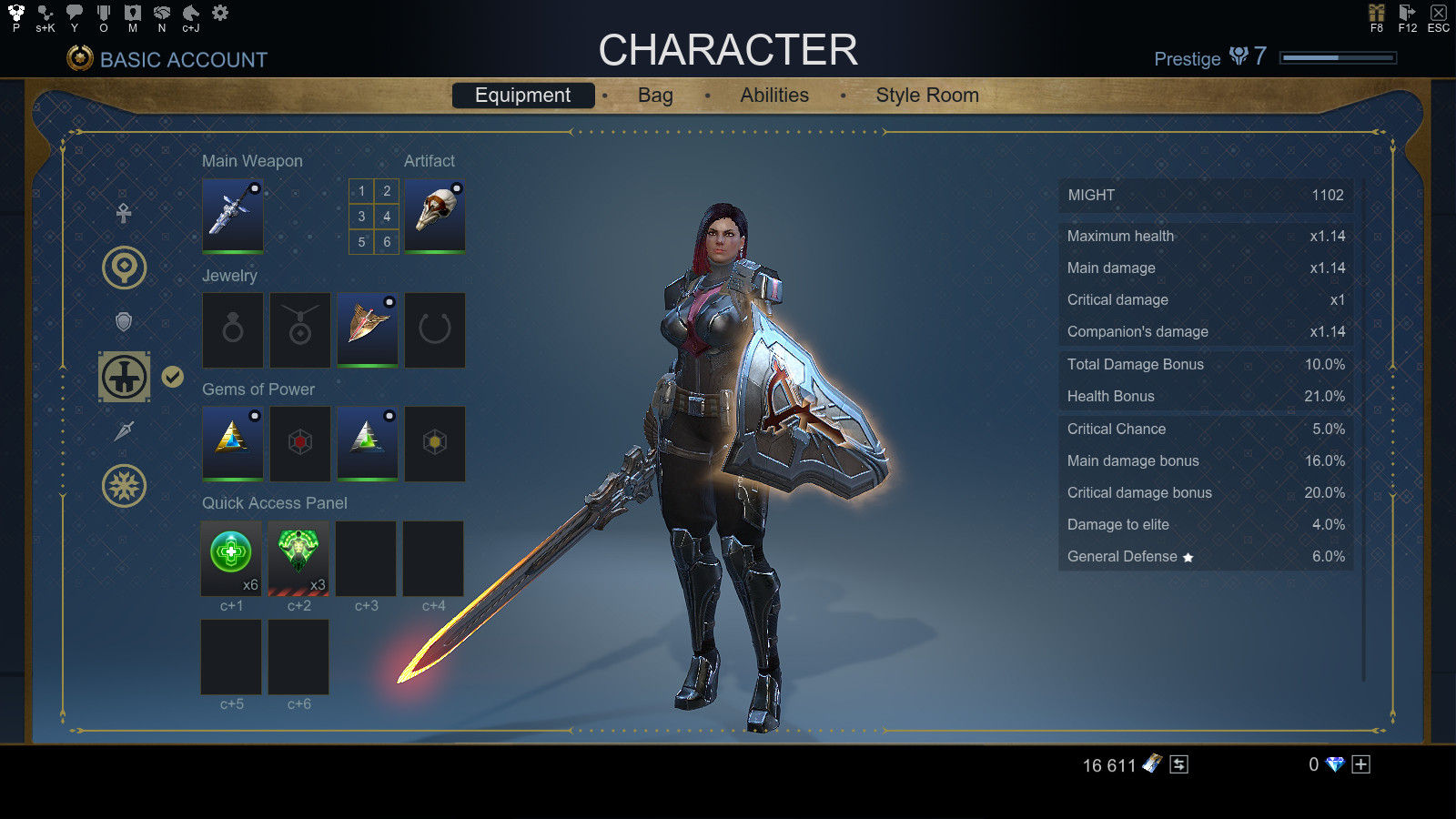 “Might” is a unified stat that determines all of the amount of damage and the max amount of health your character has.  It is increased by investing resources into the Cathedral, Tower of Knowledge, and completing quests in Bastions, which are found in each province that you go to during your journey through the main storyline.  These resources can be acquired by doing storyline missions and quests.

Prestige is essentially your character’s level.  Prestige Points are basically Experience Points and gain be gained by developing the Tower of Knowledge, Cathedral, Bastions, and gaining new equipment.  As prestige increases, so does the difficulty of the game. Many missions have a recommended Prestige rank for that mission.

Each class has their own set of abilities.  You gain more skills in your class as you kill enemies while in that class. There are also Abilities called “Talents” that give passive buffs to your character. 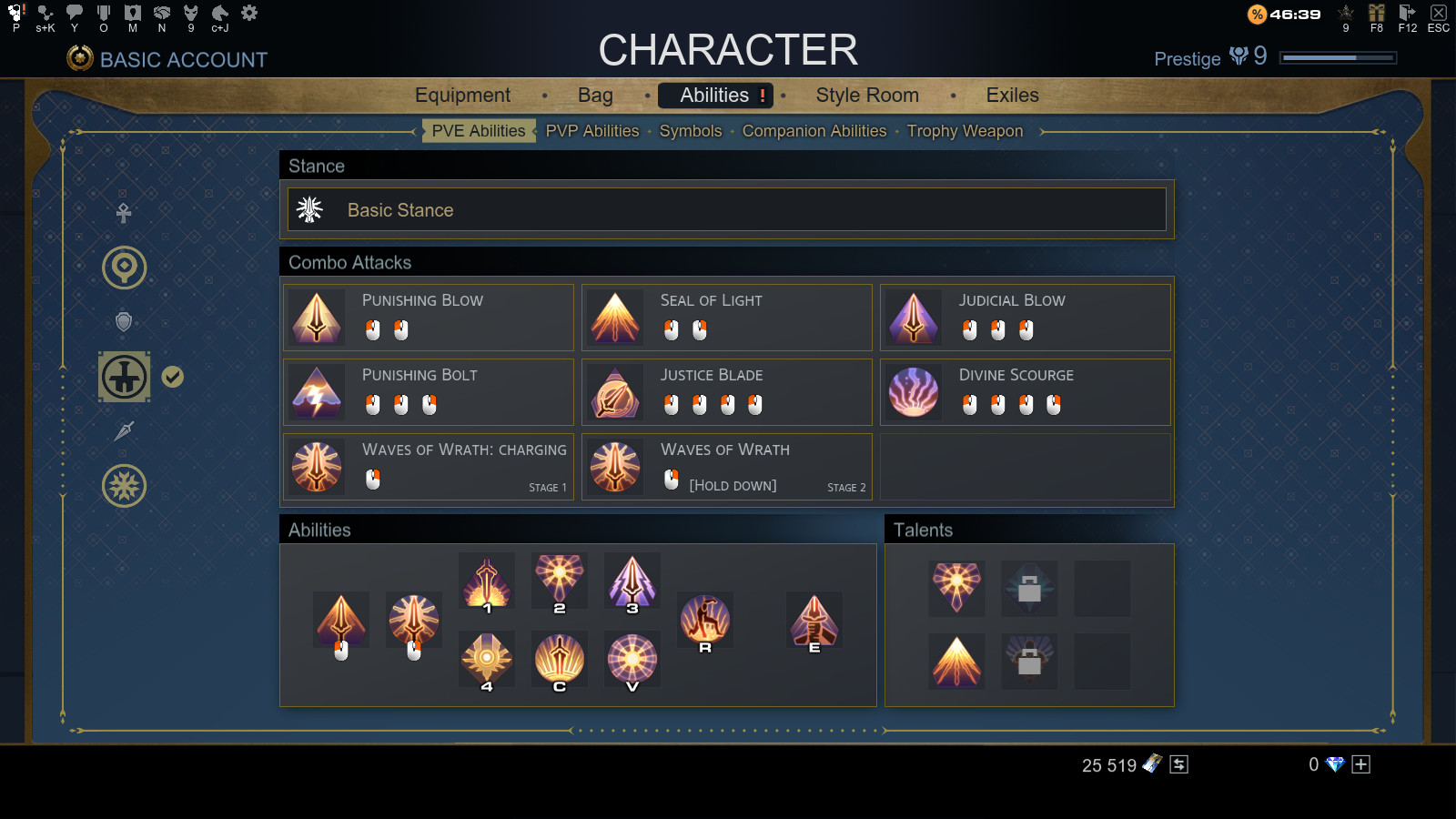 Skyforge has many different types of currency.  Credits are earned after every mission and are spent at the Cathedral to increase your Might.  Sparks of Transformation are used to purchase new classes, and are obtained by completing adventures for the first time, by fulfilling directives of the Council of Gods, and by collecting trophies from enemies. Stimulants are used to speed up or skip certain tasks like Bastion quests, and can be obtained by logging in daily, by joining a Pantheon, as a reward for special adept missions, and purchased from the Market.  Finally, Argents are the In-Game Currency used to purchase things from Skyforge’s Market.  Argents must be purchased with real money in order to get more, and are sometimes rewards in dailies, but all other currency can be obtained by doing missions and quests.

Is this a free-to-play game?

Yes.  No need to buy the game to play -- just download and play.  Just like a lot of free-to-play games however, there are a many pay-to-win aspects in the game, or rather, pay to progress faster.  You may buy a subscription service called Premium, which gives you some benefits, and you may purchase Argents using real money, which lets you purchase some premium equipment.

Premium is a paid subscription service for Skyforge.  Players can pay to have Premium status for a certain amount of days, the lowest being 3 days and the highest 180 days.  Premium gives players certain benefits, like increasing the reward they get after every mission. There is also a rank associated with Premium that increases the types of benefits players get when they increase Premium rank.  The only way to increase Premium rank is to spend Argents.

What is the Ascension Atlas?