Stronghold Kingdoms Cheats – What You Need to Know 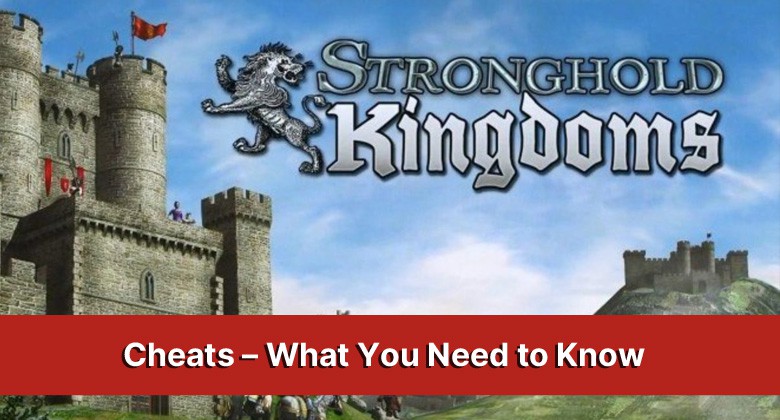 The popular game Stronghold Kingdoms has been around since 2012. Over the years, it’s developed a good and loyal player base, with new gamers checking them game out regularly. We’ve written a couple of guides on the game, including one for beginners and one for more advanced players. There’s clearly a lot to indulge, with many gameplay elements to enjoy. However, one question that’s often asked is whether or not you can use Stronghold Kingdoms cheats. We take a look at whether such cheats exist, and if you should use them.

Like many online strategy games, Stronghold Kingdoms is a game about resource management and building up an empire. The game is wired to require players to choose what they invest their time and resources in, and how effectively they can advance on multiple fronts.

It can be hard balancing the construction of buildings, recruiting of troops, production of resources, and villager happiness. Throw in the in-game politics, battles, and castle management and things get even more complicated. The best players in the game are those who have refined their processes and can exploit their resources.

The more time you spend with Stronghold Kingdoms, the more resources you’ll get and the more you’ll understand the game’s economy. However, some players don’t want to put in the time to get good at the game.

For many, the appeal of Stronghold Kingdoms cheats is that they give you an instant advantage. You can get free resources without having to spend the time farming them. In turn, this allows you to build quicker, hire more troops, and defeat your enemies.

So, most of the cheats that people search for are related to getting more resources. But does such a thing exist?

Are There Stronghold Kingdoms Cheats?

A quick Google search will reveal a whole host of websites offering Stronghold Kingdoms cheats. You’ll find plenty of people asking for them on forums, people giving cheat codes, or those promising you a trainer that you can download.

However, a closer inspection reveals a different story. Many of the people asking for cheat codes will get replies saying that such things don’t exist. Plenty of people will list out random strings of characters, but they won’t give information about how to input the codes.

So, you’ll find people offering codes that give you free wood or stone. But plenty of other users will reply saying that they don’t work. In reality, it seems that cheat codes for Stronghold Kingdoms don’t really exist.

Another popular tactic is to have a website that offers a downloadable trainer that will help you in the game. In theory, this program runs in the background and helps you get resources and construct buildings faster.

Of course, downloading random executable files from the internet is never a good idea. They can often contain trojans and viruses, or simply not work at all. Often, these types of websites will also get you to input your personal or account details, which is another red flag.

Stronghold Kingdoms Cheats – Should You Use Them?

As we’ve established, it’s hard to find anything like a reliable form of cheat for this game. Instead, there are plenty of forum trolls and scammers.

When it comes to anything downloadable, you definitely shouldn’t use them. They can compromise your personal and game data, and even cause havoc on your PC or mobile. These types of scams are popular, so make sure to watch out for them.

Another factor to consider is what it does to the game. If players were able to cheat, the game would soon lose its appeal. Regular players would stop playing the game, and the thriving community would die off. It also impacts the game’s developers, who spend their days improving the game.

What to Use Instead of Stronghold Kingdoms Cheats

If you’re really desperate to get good at Stronghold Kingdoms, there are a few things you can try without resorting to cheating.

First things first, you should read our guides on beginner and advanced strategies. In them, we cover how you can easily start gathering resources and progressing in the game. By getting these strategies in place early on, you can soon start mixing it with the best players.

Of course, you’ll need to spend some time playing the game and learning its mechanics. This is the same for any title, and there aren’t any easy fixes. Enjoy Stronghold Kingdoms for what it is – a richly detailed world with many different mechanics.

If you get really stuck, you can look for guides on how to quickly farm resources and make the most out of the game. Many of these tactics can be easily implemented, giving you the freedom to start building your empire without resulting to cheats.