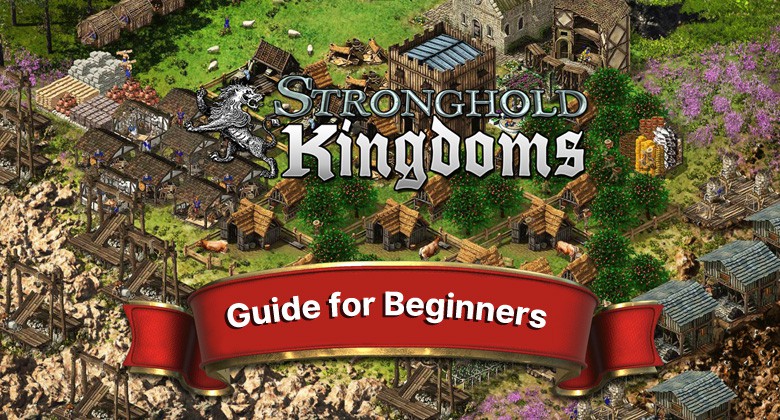 Stronghold Kingdoms is a massively multiplayer online strategy game from FireFly Studios. Although it was released back in 2012, it still remains popular to this day. It blends elements of city-building, strategy, battles, sieges, and politics. If you’re a fan of RTS games, there’s plenty here to like. Review aggregator Metacritic give the game a positive rating of 75, reflecting the games appeal. If you think it sounds like a game you want to get into, you’ve come to the right place. Our Stronghold Kingdoms guide for beginners has everything you need to know to get started.

Form alliances. Politics plays a big part in this game. You’ll have to join factions with others, support your allies in war, and expand your influence.

Most of these elements require resources, which are another central part of the game. You’ll have to balance all of the different areas, and make sure you devote enough resources to each part.

So, once you first enter the game, you’re sure to be eager to get started with all of the different elements. But where exactly should you begin?

Perhaps the first thing you should do is go through the tutorial. If you’re already an experienced RTS players, you may be tempted to skip this part. However, although it does take a while and cover the absolute basics, you do benefit from it.

The tutorial gives you experience and resources. These can be invaluable early in the game, allowing you to quickly start making progress. There are also a few points it covers that you may not automatically think of.

After you’ve completed the tutorial, you’ll be finally unleashed on your very own village. Although it can seem like a bit of a free-for-all here, you should take some time to consider your first buildings and where to construct them.

As we’ve mentioned, resources are key, especially early on in the game. Luckily, you can maximize how many resources you earn with some building planning. You should start by trying to fit as many wood cutters and stone quarries as you can in the space around your village.

Next, build enough food buildings to give you a surplus of food at all times. Remember, the more excess you have, the more your popularity will increase.

Finally, when it comes to hovels, you should build them in the center of your village as tightly knit as possible. This leaves more space for other buildings.

When it comes to research, your early-game decisions can make a big impact later on in the game. As such, you want to make sure you focus on the right areas initially. It will speed up your progress and make things easier for you in the long-run.

Here are some of the areas you want to focus on:

You should already have plenty of stone quarries and wood cutters in your village. However, by upgrading them to their maximum, you can quickly start raking in the resources. This should be a priority.

Similarly, you’ll want to improve your orchard management. Apples are going to be your main source of food early on, so it makes sense to invest some research into them. Once you’ve maxed it out, focus on unlocking new food types through farming research.

One important aspect, especially later in the game, is how fast you can construct buildings. Make sure to max out your tools so that you can keep up with the demand of building speed.

It can be hard to increase your honor early on in the game when you’re at lower levels. Scouts are one research area that can generate some honor income. Make these a priority, as they can also bring resources with them.

Once these key elements are done and dusted, you can start looking at some of the other main branches. Arts, theology, engineering and mathematics are some of the ones you should pay particular attention to.

So, that’s covered all the basics you need to worry about early on. These elements can give you a real advantage throughout the game. Check out our Stronghold Kingdoms advanced guide for some further information about next steps.