The Best Puzzle Games of All Time 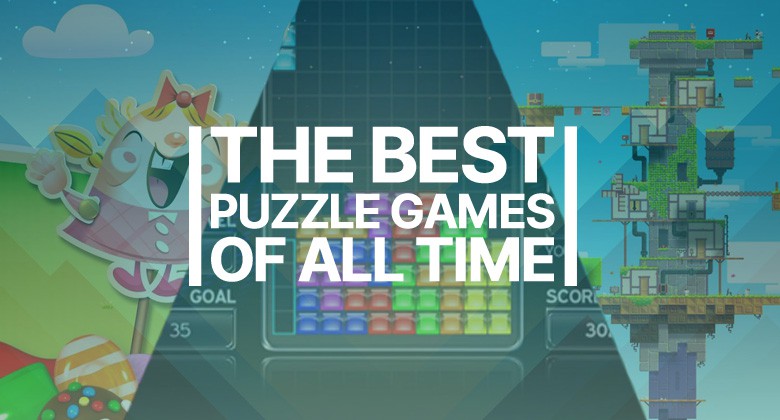 Everyone loves a good puzzle game. Whether it’s jigsaw puzzles, brain games, or free online puzzle games, they’re a great way of passing the time. In the video games industry, there have been some impressive puzzle titles that still command respect to this day. Some make use of the latest technology to create new angles, while others rely on simplicity and elegance. Either way, it’s a popular genre that continues to impress.

We’ve chosen some of our very favourite puzzle games of all time. It’s hard to condense the list to just ten, and it’s a pretty subjective list, but we think there are some stellar titles on there.

Perhaps the definitive puzzle game that just about everyone knows how to play, Tetris was first released back in 1989 on the Game Boy. It’s pretty much the first puzzle game ever released, and there have been countless versions of it across nearly every gaming platform. It’s a game that’s part jigsaw puzzle, part brain game, where players must test their reaction skills to keep stacking the blocks. Tetris is not only a classic puzzle game; it’s a classic video game.

Myst is a point-and-click adventure game that was originally launched in 1993 on the PC and Macintosh. It’s a game that was launched as FMV movie cut scenes were first becoming popular, and the game features many realistic elements. The puzzles in Myst are truly ingenious, set in an immersive fantasy world where nothing is as it seems. Even the smallest part of the environment could hold a clue, and completing the challenging puzzles is hugely rewarding. The sequel to Myst, Riven, was equally atmospheric and innovative and is worth a mention on this list.

Lemmings is a charming game that remains one of the all-time classic puzzle games. Players must guide their group of creatures from one side of the map to the other, losing as few as possible on the way. There are several types of lemmings in your group, each with its own special role. You have to utilise these roles in order to traverse the terrain, although the lemmings will literally keep on doing their assigned task indefinitely. It’s fun, challenging, and one of the best video games from the 90s. Lemmings II: The Tribes built on that success and is almost as beloved as the original.

Half-Life 2 changed the way we think about video games. Steam’s classic is one of the most influential titles ever released, and the Source engine introduced new ways of thinking about game physics. Portal was one of a number of titles that built on the success of the Source engine, and it is as influential as Half Life in the puzzle game genre. The mechanics are like nothing we’d ever seen before, challenging players to think laterally about each puzzle. It also created a game world that was charming, sinister, entertaining, and immersive. It’s a masterpiece of storytelling, and some of the puzzles are truly ingenious.

Just when we thought it couldn’t get any better, Steam released Portal 2. The game builds on just about every aspect of the original, once again raising the bar for modern puzzle games. Once again, the storyline is hilarious, touching, and sinister, while the puzzles are devious, frustrating, and incredibly rewarding. The added multiplayer elements vastly improve the replayability, and the new mechanics make Portal 2 worth its own slot on this list.

The Talos Principle is one of those rare games that totally suck you in. From its unique and intriguing premise, to its fun and challenging puzzles, everything about this game feels well-polished. Much like the Portal games, the story is a central part of what makes this game so impressive. There are clues and snippets of information in the world that build up a clearer image of the world and the narrative. It’s thought-provoking, beautiful, and innovative – a firm favourite in the puzzle game genre.

Keep Talking and Nobody Explodes

Virtual reality gaming is still in its infancy, although the potential is huge. One game that’s immediately established itself as a VR puzzle classic. The premise is ingenious – one player straps on the VR headset and is presented with a ‘bomb’. There are various puzzles that have to be solved before the bomb explodes. However, the only way to solve it is by communicating with your teammates, who have the bomb disposal manual. It’s frantic, funny, stressful, and a truly unique gaming experience. Communication is key, and players soon find themselves coming up with short-hand ways of describing the different elements.

The Secret of Monkey Island

Point-and-click adventure games haven’t been in vogue much since the 90s. However, they still have a dedicated fan base who love the nostalgia, humour, and innocence of many of the games. Perhaps chief among the puzzle games of that era are The Secret of Monkey Island and Monkey Island 2: Le Chucks’ Revenge. Their offbeat comedy, notoriously complicated puzzles, and excellent soundtrack make them icons of 90s gaming. Puzzle lovers will love the lateral thinking required to solve the riddles that give a whole new meaning to the term brain games.

Fez is a truly remarkable game that’s made with gamers at its heart. It follows the fortunes of Gomez, a 2D character who inhabits a 2D world. One day, he gets given a magic Fez, allowing him to explore the world in 3D. The premise means that players have to switch between 2D and 3D views in order to complete puzzles. It’s fun, charming, and challenging.

Much of what we’ve covered so far have been premium puzzle games and brain games rather than free online puzzle games. However, Candy Crush Saga is a game that redefined mobile puzzle games. The match-3 game is simple, addictive, and has spawned nearly countless imitations. It’s still updated with fresh content each week, making it the top mobile puzzle game out there.