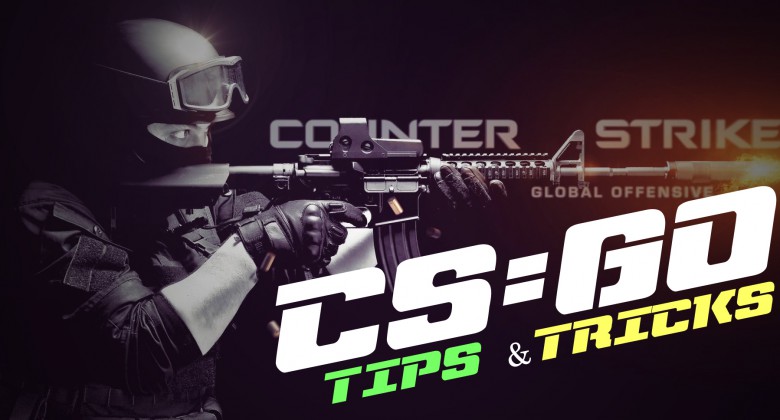 Counter Strike: Global Offensive (or, as it is commonly known, CS:GO) needs little introduction. It’s one of the most popular multiplayer shooters out there, even though it was first released way back in 2012. It’s even gone on to be something of a profession for some people, with massive contests being organized and prize money sometimes hitting $1,000,000 for the overall victor. Of course, that’s after putting in a lot of hours of practice and moving up the ranks! If you have the urge to go pro, we might be able to help. Read on for some CS:GO tips and tricks.

First on our selection of CS:GO tips and tricks is one of the most important ones in your journey to becoming victorious. Learn the weapons in the game. It can be make or break when it comes to recoil patterns on the basic weapons, so be sure to have a few tries in Deathmatch to practice. Learning long-range sprays is also really useful and will help you get multi-kills in actual matches.

Another top CS:GO tip – never go into an actual match without a brief warm-up. Deathmatch is really good for getting your eye in, or you can create an offline map with just bots in it to practice.

Often forgotten about, you’ll have five items in your utility belt. These include the flashbang, the HE grenade, the decoy grenade, the Molotov or incendiary grenade, and the smoke grenade. Using any one of these at the right moment in the game can have a huge difference in the outcome of the game. Make sure you know how these can be best used in a match!

Another one of the most important CS:GO tips and tricks – learn the maps that you could end up seeing in tournaments. The official maps can all be tried and tested, with or without enemies, so make sure you know them inside and out. You’ll quickly find out which maps you like, and which maps you perform better in as well, so make sure you use them to your advantage.

Everyone on your team will have a specified role for each game, and once you have found yours, you should keep practicing, so you know the ins and outs of that particular role. There are five common roles – Entry Fragger (the first player to enter the fight), Leader (who makes the strategy and positions for each round), Lurker (who takes a different route and arrives a bit later to the fight), Support (aids the team with flashbangs and smoke) and AWPer (a ranged fighter). Select a role you like, and keep practicing it.

Talk to your team

Communication is everything in CS:GO. Be sure to always communicate and coordinate with your teammates, as you definitely won’t be able to go it alone – it’s not how CS:GO is played! Communicating with your team means that they can act and react accordingly, to compliment your play.

When it comes to the best CS:GO tips and tricks, this one is often ignored. But having the right equipment for CS:GO can also be another make or break moment. You’ll want a system that gives you 250+ fps when playing and a 144 or 240 Hz monitor. Mechanical keyboards are best as they’ll help you with movement, and make sure you have a good mouse with a proper sensor. Finally, and perhaps most importantly, get a proper premium gaming headset. This makes all the difference as you’ll be able to hear your enemies footsteps.

Another of the CS:GO tips and tricks that often gets skimmed over – resolution. Your screen resolution and video settings will make a huge difference. Try out different video settings once you’re in the game, and choose the one that suits you best. Keep practicing with this, and try not to change your settings too often once you’ve found what works for you!

Learn from the pros

If you want to become a pro, then you should learn from them! Watching streams of the top players can teach you so much, especially when you see how they play in competitive matches. You can learn new things, and even take elements of their gameplay with you and use them yourself.

And last in this list of CSn:GO tips and tricks – keep fit. It may seem like a strange one to consider, but keeping fit can help you avoid injuries to your wrist and forearm. You can also avoid getting a repetitive strain injury, which are really common among gamers. This can completely ruin your gaming career, so make sure you keep stretched out and fit.