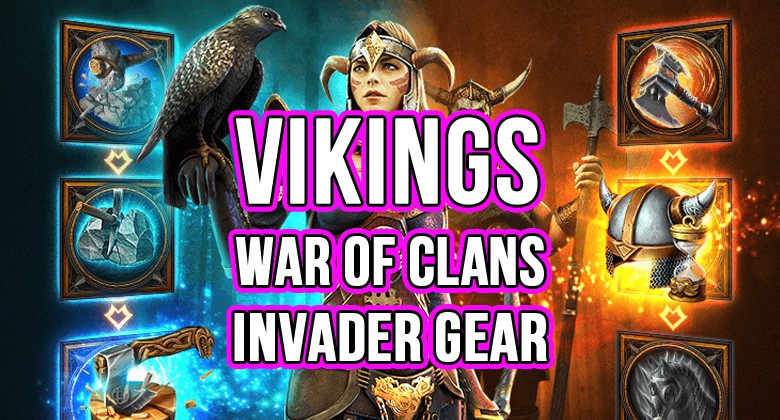 In Vikings: War of Clans, there are many elements that affect how successful you are at the game. Like many similar mobile and browser-based MMOs, Vikings is free to play. However, to supplement the developers, paid microtransactions exist. Players can buy gold which speeds up the process of levelling buildings, heroes, and recruiting army units. Although this helps players with many aspects of the game, it’s not the be all and end all. Your hero’s equipment plays a large part, and you need patience, luck, and experience of the game to get the very best. We take a look at Vikings: War of Clans Invader gear, why it’s so useful, and how to get it.

Like in many similar games, the equipment in Vikings: War of Clans has several purposes. However, the main ones in this game are to improve your hero’s stats and give boosts to other areas of the game. With the right gear, you can make quick progress through the game, even without spending any money on microtransactions.

As you play through Vikings: War of Clans, you must level up your hero, and their stats will improve as you do so. However, it’s only with the right equipment that you’ll maximise these stats. To add another layer of complexity, different sets of equipment boast different stats. So, for certain situations you’ll need specific stat boosts.

To help you select the right combination of equipment and skills, Vikings: War of Clans has a feature known as Hero Sets. We covered this in more detail in another guide. However, essentially this mechanic lets you pre-build equipment and skill loadouts to switch to in various scenarios.

As you can tell, equipment plays a significant role in the game. There are several tiers of equipment, as well as levels and rarities within these tiers. Early game players will mainly be focused on Standard Equipment, which can be constructed from readily available resources.

More advanced players will want to start building Vikings: War of Clans Invader gear. As we’ll see, this requires materials that can only be found from defeating invaders. The top level players will focus their efforts on building Special Equipment, which is made from the rarest and hardest to find items.

The equipment you forge will also have rarity tiers, and as the quality increases, so does the value and performance of each piece of equipment. There are six tiers in total, including:

You’ll notice significant improvements between simple equipment and legendary equipment, so it’s always worth saving up enough materials to go for a higher level.

We cover this topic in greater detail in our Vikings: War of Clans Equipment Guide. However, at a basic level, you must combine materials and resources to craft all the equipment in the game. This includes things like weapons, armour, helmets, boots, and amulets.

When it comes to materials, the rarer it is, the more chance you have of crafting an item of a higher level. Keep this in mind early on in the game, where you may want to save your better materials for later. The game defaults to choose the rarest materials for the crafting process, but you can change this as you go.

So, once you’ve mastered the basics of the game and you have some solid sets of Standard Equipment, you’ll want to start raising your ambitions to Invader Equipment. There are many different invaders you may face in the game. Each drops its own unique combination of materials which you can then use to craft Invader Equipment.

There are 16 different invaders that appear on the map, although there’s no way of predicting when and where they’ll appear. You’ll find that invaders have a focus on a particular strength, and the items they drop (and equipment you craft) reflect this focus. Invaders range from level 1 to 6, and the higher the level the more dangerous they are. You’ll also find Uber Invaders closer to the centre of the map.

If your focus is on killing Invaders to get more item drops, this set can be especially useful. There are several bonuses that this set will bring you:

If your goal is to take down as many Invaders in as short time as possible, this is a set worth aiming for. It brings with it the following advantages:

Here, you can see a very different set of boosts that serve a different purpose from the first example. It’s for this reason that you’ll want to aim for different sets of armour for specific instances.