Aion, in my opinion: great

Over the years, there has been a growing number of attempts to unseat the ever-WoW from the most widely played MMORPG podium.
Of self-proclaimed games "the anti-warcraft" have come out in abundance but, unfortunately (or fortunately, depending on the point of view) no one has ever really emerged victorious against the champion.

Also complicit in the crisis, in one of the most difficult to maintain genres, like that of MMOs, a curious phenomenon has developed.
In order to cope with the commercial results that are not exactly excellent, many producers have had to align many of their products with free formats or, in any case, very facilitated from a monetary point of view, in order to save them from the brink of bankruptcy: This is the case of Aion.
The game is set in the world of Atreia, now in ruins where, following a war of enormous proportions, it has come to create a literal rift that has divided it into two distinct parts, one radiated by the brightness of light populated by Elyosians, the other immersed in darkness and inhabited by the Asmodians.

The narrative background of the game is, however, more complex than that and, if you wish, the game provides us with various opportunities to deepen our knowledge about the world of Atreia; here, it is enough to know that the two factions are at war with each other and that, failing to do it on purpose, the player will be asked to choose which race to line up with.

the player will have the task of choosing between Elyos and Asmodians.
The Asmodians are enchanting beings, with almost perfect features and that, although this definition is not entirely correct, it could be said that their appearance traces what is usually attributed to the alignment of the "good".
The Asmodians, on the other hand, are beings who rarely saw the light of the sun; their appearance has changed proportionally to this characteristic, they are dark creatures, sometimes traits, bestial. By playing this game you can get 100 Play
The choice is quite radical and, once you have opted for one of the two races, we will not be able to create characters belonging to the rival faction if we do not change servers first or delete all those already created.
Having chosen the race, we can decide which class to belong to, choosing from a rose of six: warrior, explorer, magician, priest, engineer and artist.
The classes are all well differentiated from each other and, reached a certain level, each of them can evolve into different specializations.
Excellent also the side related to the mere aesthetic customization of our character; the present editor is not the most profound that have ever been seen but nevertheless remains at excellent levels. The parameters on which to act are very many and, whether you want to create an elf with a modeling body or a perfect dwarf to impersonate Santa Claus retired, there is no risk of being disappointed. Aion, keyboard in hand, is a full-blown MMORPG. Wandering around the world we are assigned tons of quests to complete, all the previous ones, more or less. The tasks to be completed, in fact, are more or less the same and if you expect big variation from the classic "go, kill tot. X and back ", the risk of not seeing their expectations met is quite high.

The quests are more a way to have a sort of "guide" that accompanies us in the growth of our character than anything else, despite those related to the main plot let themselves be played with pleasure.
Lately, there have been several MMORPGs around who have partly embraced action features to streamline fights and refresh the gameplay; Aion is not part of this category and remains faithfully anchored to what are the original cornerstones of the genre. The fights take place by aiming an enemy and selecting the various abilities. Player timing and reflexes are more than marginal. 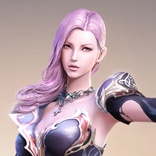 100 Play
The graphics engine that moves the game is a specially modified version of the CryEngine, an engine that, at the time, was able to drop the jaw to more than one player.

When Aion came out he earned the reputation of being one of the most graphically MMORPGs, and rightly so.
Time, however, is the worst enemy of graphic avant-gardes and, unfortunately, even Aion could not escape this law.
Let's specify, it is still a beautiful title to see, with dream landscapes and well-modeled and animated characters; only that, over time, other games have come out that have ousted him from his throne, making him lose a record that, until a few years ago, he was entitled by right.

Conclusions
MMORPG fantasy have made dozens and hardly one comes out in a position to stand out on all the others; Aion is one of these.
Curious, refined, fun and long-lived, the title NCsoft is able to offer so little pretending.
Of course, now he has lost the enamel that he had at his exit, not so much in terms of mechanics and contents that, over time, have been expanded and refined, but rather, in the competition that has definitely become more fierce than in past.
Last note: the title was not born free to play, but it became; as a result you will have the quality of a paid title without having to pay a penny.
1187 0 Share
5.0 (1)