Beat saber is a music based game for mainly the vr but you can also get it on steam, today I will be going over my likes and dislikes of the game and it’s mechanics and the overall gaming experience, This will be based on how the latest updated model plays on the oculus quest 2 as it may play better or worse on other models or platforms. The premise of the game is simple you have two swords and have to hit coloured blocks in the designated direction according to its matching sword colour while also dodging objects such as walls or bombs and aim for the highest score possible. One huge benefit however is that there is a lot of modifiers to spice it up as there are modes like one handed no directions or 180 and 360 degrees respectively; however these final 2 require a good amount of space and while fun I would recommend caution to avoid injury. Beat saber also provides modifiers to alter the game slightly to your taste and level of experience there are many modes ranging from easy to expert + as well as mods to increase or decrease your score like no fail, no walls etc. for decrease and faster song, ghost notes, fast song etc. to increase difficulty. You can also change the background and colours of your swords for a custom colour set or a pre-done set for free which is a nice add on considering you already have to pay quite a bit to purchase the game even if it isn’t as expensive as other games on the Vr. There are also many game modes you can play: campaign which is the story like mode with set challenges, my personal favourite solo mode where you free play to your taste and can compare your score with the world. Party mode which is very similar to solo mode and online where you can join a quick play based on difficulty setting or make a custom room with a code for you and friends. The quick play in online mode is very fun however even though there is the option for a dlc pack included setting often the og songs are chosen over the dlc packs, so if you wish to play your dlc packs and you do not have friends for a private match your better off in solo mode. 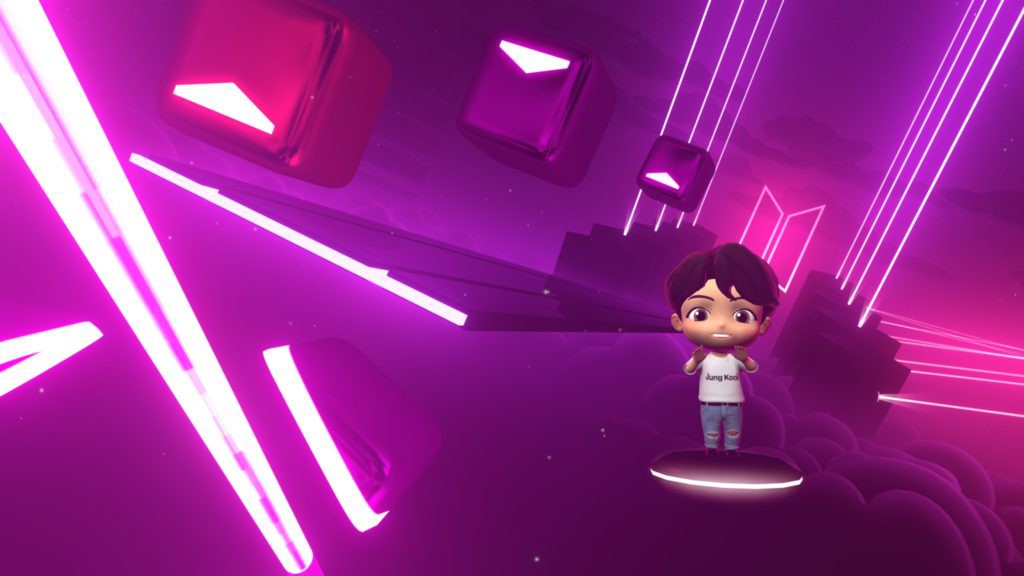 There are 4 packs of songs that come free with the game, many ranging from relaxed and relatively slow to upbeat and fast. While the game was designed for playing standing up if you have a chair (turn-able one for 180 and 360 modes.) You can play it sitting as well by adjusting your height to automatic. There are also more songs from popular bands such as: panic at the disco, imagine dragons, BTS, green day, linkin park and a few others; these of course however require separate payment but you do have the option to buy whole packs or separate songs which is a good option to have if you only want a particular song or can only afford a bit at a time. The dlc packs tend to be tougher than the average songs which can pose a challenge but can cause some frustrations. I particularly found the BTS dlc pack frustrating as the provided BTS background has the tiny tan members flying around the screen and while adorable it can be very distracting on harder levels. To summarize Beat saber is a Vr staple that is addictive and while still needing a minor tweak or two is still a very solid game for all experience levels and any that love music and a good game.