The game tells the story of two major Global mercenaries group Global Risk and Black List between the showdown. There are team mode, team game, blasting mode, ghost mode and other modes.

No one knows who created the lurk mercenary company, or where its headquarters are. Some say it serves third world countries, others claim it has carried out "special missions" for rebels. So far, however, no one has found the person in charge of the company, and there is not even any law to bind it.

But at least one thing is clear to everyone: lurkers never serve the powerful.

Some say that members of the lurk are flowing wild blood - which makes them willing to serve small and weak countries, or even perform certain "special services". But to outsiders, everything about them is mere guesswork.

As early as the beginning of the guardian mercenary company, it began to openly recruit from the famous special forces retired members. This mercenary company serves powerful countries in the name of peace. They claim that they have the most righteous stand, if the fight against their beliefs, even if there is a lot of money temptation, they will not be moved.

The defenders, however, have never given details of every battle they have fought, or even to their own members. So their public claims of "just" action are increasingly being questioned.

Soon they were accused of being tools of powerful states and big business. There are even more rumors that many excellent players have left the security mercenaries company because of their actions against their ideals. Default has three backpacks, players can also use backpack props expansion, each bag can be equipped with 1 the main, secondary weapon, melee weapons, the default to a throwing weapon, equip it after paying capacity can be equipped with hand grenades, smoke, flash play each one, a player can in a warehouse, warehouse will accommodate 1000 game props) choose equipment bundled into a backpack, each time to start a new round or resurrection can by changing the bags for the right of a complete set of equipment system. At the beginning of the new round, you can press "B" button to switch the knapsack and choose different knapsacks. If the enemy drops his weapon after killing him, you can press "G" button to discard the existing weapon and replace it.

The game mode of team competition aims to destroy the enemy. The first to destroy a specified number of enemies in a fixed period of time can win.

Ghost mode this is a new way to play! In the same victory mode as in blast mode, the attacking wraith must detonate a C4 bomb to complete the mission, but the wraith is invisible, visible only when moving, and can only be used with a knife.

Annihilation can not use their own weapons, only use the map of existing weapons. Victory is achieved by annihilating the opponent within the given time.

At the beginning of individual competitive games, players will be randomly born in a certain place in the map. All the people they see in the game are enemies. The more enemies they kill in a given time, the higher the experience and rewards they get, and the higher the ranking. 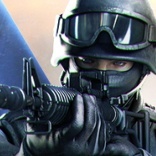 After entering the game, you can find the map room you like in the channel to join the game. You can also choose the mode and the map in the mode under the option of creating a room to create a room. In addition to the man-machine mode, at least two players in other modes can start the game.

There are three types of terrain in the game: water, land and air. Players on land will see objects in the water that are visually affected by the surface of the water. In the picture quality setting, the system will open the map special effect function according to the player's computer configuration. After opening this function, the original picture quality will be enhanced in some maps to make the picture more real.

General Settings, the weather will be turned on and off will have a different live effect, after opening the map light effect has a more detailed performance.

Special titles and attribute bonuses give players who enjoy fighting in the game a greater sense of purpose. The title system creates new challenges for players in the form of successive unlocking. Each title has different conditions for obtaining. With the increase of the difficulty of the conditions, titles will become more and more difficult to obtain. Each title has its own additional attributes, players in the title at the same time can obtain its corresponding attributes, in actual combat can bring a lot of convenience for players.