CSGO OR CSNO - WILL YOU BE GOOD AT THE GAME?

Counter Strike Global Offensive, developed by Valve and the infamous Gaben. This game involves a million dollar circulation of weapons skins, which can be acquired onto the guns used in the game. There are action filled maps on which there are two teams, Counter Terrorists, and Terrorists. On some maps, the terrorists must plant the bomb and defend it until the bomb detonates. On some others maps, the Counter Terrorists must go and rescue a hostage and bring him to the rescue zone to win the round. On all the maps, the team planting the bomb or rescuing the hostage must do it in the given time limit. There are different game modes including deathmatch, which is an endless game (more like 10mins of respawning) where you must get kills to get points. If you get a kill with the bonus gun, you get bonus points which boosts up your score. 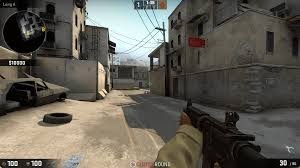 By playing this game you can get 100 Play
Counter Strike skins are highly sought after, with some selling for thousands of dollars and the best players being loaded with skins in their inventory. You can get drops weekly from leveling up in game. These drops include graffiti, which is worth 3 cents, cases which can be worth up to 50c and skins. It is most likely that your skin drop will be worth 3-10c but some people get drops worth thousands of dollars. Knives and stat-track skins (which counts the number of kills you have gotten with that gun since buying the skin) can only be un boxed from cases. There is a wide variety of cases, with each one having different skins. These skins are community made. To get a community skin into Counter Strike, the creator must make the skin and install it into the game files, then take screenshots of it in the game and post it on the steam community workshop, where people then vote for the skins they like. 100 Play
Competitive Counter Strike is a big thing, both in tournaments and in the game. Players can participate in a 5v5 best of 30 rounds. Winning and playing well will slowly rank you up. The lowest rank is Silver 1 and the highest rank is Global Elite. The best players are constantly playing so it will take a lot to become one of them. Losing in a competitive game will lower your rank after a few losses in a row. If you get kicked from the game for a variety of reasons, you will be given a cooldown period, ranging from 30 minutes to 7 days. In a competitive game, you can damage your teammates, all though you will most likely be kicked for doing so. To be a good Counter Strike GO player, you must learn your smokes and grenades and practise your aim to be able to play well. It might seem like a hard thing, but it won't take long before you are slowly ranking up to a top player.
1704 0 Share
5.0 (1)