Do you want to experience team fortress 2 to the fullest? Do you like the fast-paced and violent gameplay of team fortress 2? If you answer yes to any of these then the scout is just for you. You may have played scout once and you might have either loved him then mained him or maybe you thought he was really hard to play and left him. Whatever your case might be let's learn about scout effectively. First, let's learn about scout. Scout is a boy from Boston who loves baseball and he is also very skinny. He only has 125 hitpoints and it can be taken down to 110 hitpoints by using some of the unlockables in the game. Because he is so weak in the terms of hitpoints the developers have made up for this by making him the fastest class in the game and giving him a very high damage output. He is 33% faster than the average of all the classes in the game. When a class is so weak in terms of survival then it makes sense to increase their movement speed and their damage to give the class a way to escape. His other ability is the double jump. You can press your jump key mid-air to jump for a second time. This movement ability allows him to reach higher places where other classes can't. This way it is much easier to flank your enemies. The scout is also very good for capturing points or pushing the payload. Despite his low health, the scout can capture points and push the payload two times faster than other classes. 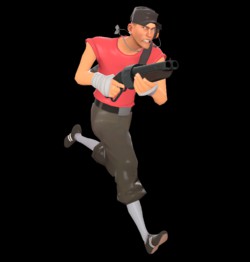 Now let's talk about his loadout. Since he is an attack class it makes sense why his primary and secondary weapons excel at dealing huge amounts of damage. The main source of damage for scout is his scattergun. The scattergun is a shotgun which shoots 10 pellets of bullets. You need to reload this gun after every six shots. This weapon can deal up to 106 damage if all of the pellets connect to the target. Since you are most likely not going to stay still as a scout it will be hard for you to connect your shots. It is also a shotgun so all the pellets don't have any chance of connecting in a longer range. Scattergun is an amazing gun and I wouldn't suggest replacing it with any other primaries for the newer players. However, if you want more mobility as a scout then you can replace the scattergun with other alternatives like the force-a-nature or the soda popper. Talking about the scout's secondary it is a pistol. I don't see you needing to replace this but if you prefer a different approach as a scout then the scout's secondary section is filled with items like Crit-a-cola, atomic punch, winger, mad milk, mutated milk, and pretty boy's pocket pistol. It all comes down to you about what you are gonna use as a secondary. Talking about scout's melee weapons the baseball bat is completely useless. It doesn't deal much damage nor does it have any special effects. The best replacement for this is the atomizer which allows triple jump for the player. This effect takes place when scout is holding the atomizer while jumping. I think that this was enough for the scout's loadout so now let's move on to the things that you need to be mindful of when playing as a scout. Firstly your aim is very important as a scout. You can't just randomly shoot pellets expecting to hit. As a scout, you need to learn to strafe aim. Strafe aim when you aim with your A and D keys. As a scout, you always strafe when you shoot so it is very hard to position your mouse correctly to hit your shots. While strafe aiming you can just use the A and D keys to move your crosshair. This way you can shoot immediately when the enemy gets near your crosshair. This may sound easy but it is very hard to master. Strafe aiming is just like passive aiming as a sniper big in this technique you have to move and get your crosshair near to the enemies instead of hoping for the enemies to get near to your crosshair. As a scout, you always need to remind yourself that you are the fastest class in the game and you need to take advantage of it. The double jump is just like a cherry on top because it provides extra mobility to the already fast class. When playing scout you shouldn't be in the front instead, you need to be flanking the enemies and weakening them. Just because the scout is a killing machine doesn't mean that you can't hit and run. When you poke your enemies and make them weak it will significantly help your team. Because of this reason, you should consider scout as a flanking class that isn't ideal for the frontline because of his low health. The last thing I want to tell you is to stay away from sentry guns because of your low health pool. Sentry guns have a very high DPS and they can shred you in a few seconds. Your weapons are also not ideal for long-range combat so you cannot finish off sentries when the engineers are around. Always take the help of your teammates to deal with the sentry. Even though there is more to scout than this you will eventually learn all of it as you continue playing. That's it for today and have a good day.