With the premise of creating virtually anything by simply writing words, 'Scribblenauts' and 'Super Scribblenauts' became massive hits on Nintendo DS. 'Scribblenauts Unlimited' is the fourth title in the series developed by 5th Cell and the first one to bring the game to major platforms, such as PC, Xbox One and PlayStation 4. It is also the first game to provide a backstory for Maxwell and his quest for the Starites. Maxwell is revealed to be one of 42 children of two adventurers, who received two gifts from his parents: a magical globe which allows him to travel anywhere in the world he wants in the blink of an eye, and a magical notebook which makes anything written on it come to life. As time passes, Maxwell's parents begin to worry that he and his sister Lily are becoming spoiled by the notebook's power, so they send their children out into the world to experience it's obstacles and challenges. Soon the two kids run into a hungry old beggar. Being the mischievous prankster he is, Maxwell gives him a rotten apple. Unfortunately, this angers the old man, who then proceeds to curse Lily, whose body slowly begins turning into stone. Maxwell's brother Edwin tells him about the existence of Starites, magical star-shaped objects which are born from happiness. So Maxwell sets out to use the power of his notebook for good in order to gather enough Starites to break the curse placed on Lily. 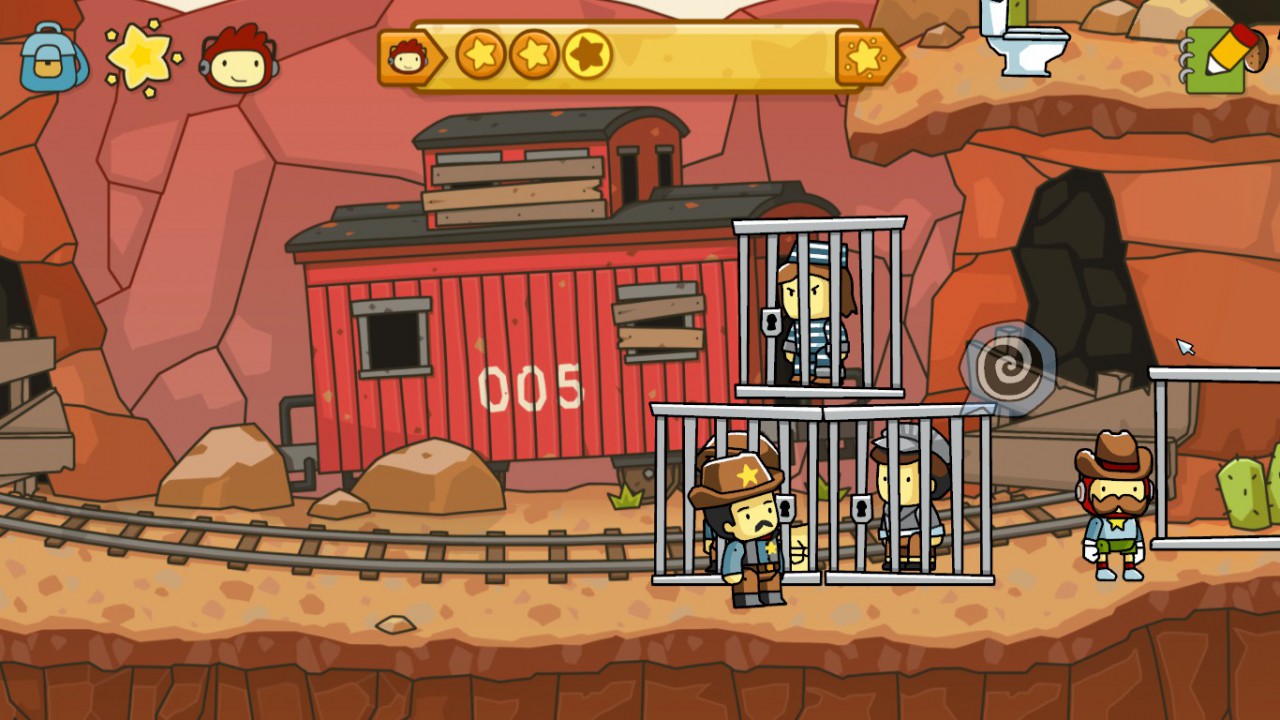 A major difference to the previous games is that the setting is a wide, open world. Once the first levels have been completed, you can travel almost anywhere in the world. There are two ways to earn Starites: completing levels with several parts given by specific characters or by completing smaller tasks scattered through the regions. Completing a level yields one Starite, completing a smaller task yields one shard, with ten shards resulting in one Starite. Like in the previous games, it's possible to create just about anything just by writing the desired word. A minor new feature is the ability to add adjectives to objects that are already in the world without the need for a potion. With literally thousands of possible objects to create, one can be creative when looking for a solution to a problem. A game with so many possibilities also includes a whole lot of pop-culture references, some on the levels, some as objects which can be created, such as cameos for several developers from 5th Cell. With the exception of the 3DS version, the game also features another new feature in the form of object editor. Object editor takes the possibilities of creation to new levels by allowing the player to create any type of item, creature or vehicle by combining parts from ordinary objects. It's possible to alter the objects size, colors, is it alive or inanimate etc. If it's alive, player can also modify it's behavior, such as what will it eat, will it be agressive towards something or is it afraid of something.

In contrast to the first two games, 'Scribblenauts Unlimited' doesn't feature any action-based levels with lethal obstacle courses. This might in a way highlight the one possible flaw of the game: it's extremely easy, even though some puzzles can be a bit more difficult to get right. Sometimes there are two conflicting puzzles, such as one person who wants to chop down a tree and another who wants to protect it. In those cases the only way to acquire all the shards is to reset the level. On the whole, the game probably doesn't offer any true challenges, but if all you want is to have simple fun or to sharpen your imagination, you definitely should give this game a try.