Star Wars Battlefront is a game playable on Xbox One, Playstation 4 and PC (Windows). It is a 3-D FPS game based in the Star Wars Era, allowing you to be heroes for the rebels (Luke Skywalker, Han Solo, Princess Leia), heroes for the empire (Darth Vader, Emperor Palpatine and Boba Fett), a rebel trooper or a storm trooper. There are several different modes: I will talk about my favourite in the next paragraph, but for now survival and battle.
Survival: Survive 15 rounds of Medium, Hard, Master difficulty storm troopers trying to kill you. Very difficult, recommended to bring a friend. Survival includes: trying to take down AT-STs.
Battle: You and an elite team of five can battle another team of six (including opposing captain) to get tokens after kills and take control of the area of the battle. 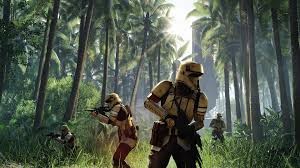 Walker Assault:
BY FAR... MY FAVOURITE GAMEMODE! You can get tokens to play as heroes (Darth Vader shown below) and choose to be fighting for the rebellion of the empire, on the map below I usually choose Empire, because I can get nice sniper shots at the start of the round with my pulse cannon. The aim of the game for the rebellion is to keep the uplinks online for long enough to get Y-Wings locked onto the AT-AT(s) co-ordinates, doing so will bring super fast Y-Wings down to bomb the AT-AT(s) (as there can be more that one per map) and then attack the AT-AT(s) with all that you can, and as the empire you have to keep the uplinks offline and kill all rebels trying to take down the AT-AT(s).
Fighter Squadron:
An all-out Aerial battle where you can choose to be rebels or empire again (separatists don't come until Star Wars Battlefront II (2017)). To take control to the skies, The aim is to get the most kills and the only hero for the rebellion is the Millenium Falcon, and for the Empire, the Slave One. 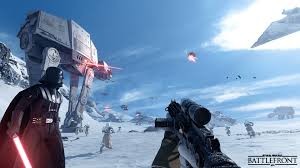 Overall, that's all I have to say about this amazing game, I highly recommend this, but don't buy it now, wait and save up for Star Wars Battlefront II (2017) because the Beta comes out on October 4, so start saving up and get ready for the huge fan-fest videos on YouTube, because Star Wars Battlefront I (2015) have sold over 14 million copies as of 31 December 2016. The graphics are great, and the first-person point of view, makes you feel like you are actually a trooper, wether for the rebellion or the empire, it's you're choice, but choose wisely, because you never know who is going to win until an AT-AT is down and the other is under 10 health or until you turn into Darth Vader and go on a killing rampage and kill over 50 people.To be fair though, try to beat this (My highest kill:death ratio): 231-1. Good Luck and MAY THE FORCE BE WITH YOU!
1837 0 Share
5.0 (1)