Minecraft is a very popular game with alot of different types of mobs, ranging from witches to friendly pigs. Today, I'm going to be talking about a specific type of mob, the boss mobs. These are different from regular mobs as they are more diffucult to defeat and drop special items and a ton of experience. Firstly, I am going to talk about the Ender dragon. It spawns in the End, and surprisingly, will spawn in any difficulty, even peaceful. The ender dragon can also be spawned by creating a configuration of ender crstals on the exit portal. You can also use commands to summon one. How it attacks is, it will circle and in between circling, it will either fire ender charges, charge at a player, or do breath attacks. An interesting aspect of the breath is, you can collect dragon's breath in an empty bottle.

By playing this game you can get 100 Play
The ender dragon can heal by ender crystals and is more vulnerable at the head. Once defeated, it will drop a mass of experience, 12000 to be exact, activate exit portals and end gateway portal, and drop a dragon egg. Next s the wither. They are spawned by making a formation of soul sand and wither skeleton skulls. Unlike the ender dragon, this does not work on peaceful. The wither will drop one nether star and this nether star won't despawn. It also drops experience. How it attacks, at first, it grows bigger and bigger until it becomes full health and while it is bloating, it is invincible. A health bar will pop up and then it will create a huge explosion. This is when the invulnerable state stops and you can start attacking the wither, and the wither start attacking you. It is immune to fire and lava and drowning. 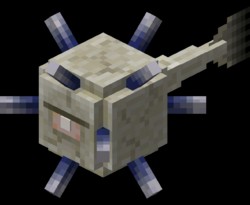 100 Play
An interesting thing about the wither is that it doesn't attack undead mobs such as skeletons, wither skeletons, zombies, stuff like that. The wither will float around. Next is the elder guardian. It is kind of a boss mob, interpret it however you like but i am going to include it in this article. It only spawns during the generation of an ocean monument. They drop prismarine shards and fish. They can be used to make prismarine blocks and bricks, which are pretty blue block used in building and decoration. It attacks by using its lasers. IT also defends with thorns and gives you mining fatigue. If the elder guardian is trapped in a corner, it will extend its thorns in a defense and tha deals two hearts of damage. Elder guardians also attack like regular guardians, unsurprisingly. The elder guardian can also attack invisibility.
1336 0 Share
5.0 (1)