I love Paladins. It is one of my favorite games of all time; but one of the things I hate the most is when they play champions badly, especially Makoa. Makoa is a turtle, with a shell, and a huge hook. You look at him and think, wow, he must be good. Players don't use him to his full potential. He is a champion only a few people understand how to use. I personally enjoy playing him a lot, at least when I get healing.

That brings me to my first point, no one heals enough. Makoa needs a constant heal stream to stay alive, he isn't a beast when it comes to damage but he deals a decent amount. I need constant healing to keep him in check, and not just a one time heal. This saying, champions like Pip and Seris don't heal him well. The best champions to heal him is Ying, Jenos, Mal Damba, and Grohk.

By playing this game you can get 100 Play
Makoa is decent with damage, but only if you choose the right cards. I use healing myself for 1000 healing for every person hit with shell spin. In times of great need this has helped me stay alive for longer periods of time. I feel the best legendary for him is the hook one. It increases the damage from the hit after the hook by eighty percent, increasing it by a high amount making his attack from 600 to 1080, and if you have a short cooldown on the hook, than you give someone a chance of 1080 damage every 5 seconds (the cooldown can be reduced in game). I only use this legendary card because of its effectiveness and its use to to help allies when they are in need. Another great aspect of the hook is that you can hit through Androxes's reversals. That extra damage from the hook helps kill Andro a lot quicker. 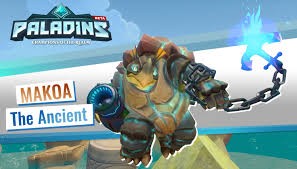 100 Play
Now Makoa also has his shell spin, my opinion of that is slim. It isn't that useful other than running away from enemies, of course it heals me for what I use in my load out, but other than that it doesn't have much use. What I do with my load out is I increase the distance of the shell spin. Making it easier for me to escape and I can hit for enemies, I also decrease the time I can use it, making it easier for me to escape out of hard situations. Which, to be honest, happens quite often. Paladins is a very fun game, and a lot of champions can kill Makoa pretty fast, including Bomb King, Sha Lin, and even Ruckus. The game itself is a amazing game that is fun for everyone. You can be bad at the game and you can still have fun. I would rate this game eight out of ten, because its not a perfect game, but its still a lot of fun.
1548 0 Share
5.0 (1)