Rocket league changes the perspective of gaming in a gamers point of view as it reconstitutes the elements of gaming totally. I personally have not played the game but the comments that I have heard from my peers and the people around me makes me want to purchase the game and experience the uniqueness of it on my own along with my friends. The title is a mixture of both the concepts of the game which are Unrealistic smurfed cars and the sense of competition in the form of soccer. This is an ideal option to draw an audience of gamers forward and ensures that they purchase the game. Also, the way the creators portrayed posters and images as thumbnails encourages and persuades gamers to 'check out' the game and to try it out for themselves. Also, the time and effort that the creators and editors but in to release updates that cater for the gamers needs. By playing this game you can get 100 Play
The Graphics are portrayed crystal clear and the controls are fairly easy to master. The game experience that rocket league commits and ensures that the gamer is enticed in ensures that the gamer is fully into and committed to the gameplay and makes him/her want to carry on playing. Due to the multiple platforms that Rocket league is available, it ensures that any type of gamer can enjoy the experience of this magnificent game. The game modes help keep the gamers hooked and with Rocket league as repetition isn't affecting the gameplay and the players and stuck with only one game mode which eventually gets repetitive and boring in the gamers perspective. Ease of control is aided by the option of adding a controller which can help players that usually game on consoles easily adapt to PC conditions. 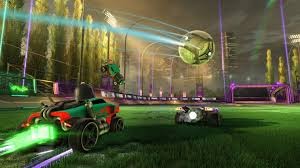 100 Play
Also by making the gameplay unrealistic, it entices the audience as the cars are flying and is a mixture of football and car racing in one game. I really do recommend this game to a wide range of gamers who want to experience something new and exquisite. Due to the graphics being so great and visually appealing to the gamers, High Spec PCs can make the game look very visually aesthetic. The multiplayer connectivity ensures a competitive feel for the online community as it ensures new possibilities for new gameplay modes. Also affiliating with Esports was a good move to motivate gamers to step up their game and to compete with other world-class competitors also gives Esports and audience that can view the skill and hard work that the gamers have put in to improve their game and to ensure a good experience for viewers.
1190 0 Share
5.0 (1)