Rust - and how I (didnt) survive my first day.

I awoke on a beach, small huts littering the shore line. Immediately to my right, a naked man lay upon the shore. A Stone building behind him hid whatever was in the distance so I decided to take to higher ground to find a nice starting area. I reached high ground and could see nothing but mountains and small huts. Finding a start area is going to be harder than I thought. I ran through the mountains, not stopping for anything, night slowly falling i figured i would run through the night and check out my surroundings in the morning. Thats when I heard the familiar rumble of a planes engine. Do I risk running into other people by going for the loot box? Yeah, what have I got to lose. I followed the plane through the night, glancing to the sky on occasion to make sure i was running in the right direction. By playing this game you can get 100 Play
I watched as it dropped its sweet, sweet loot from its cargo hold. A looming mountain ahead of me had me worried about freezing to death but i decide to take that risk too. Upon heading over the rise of the mountain I was greeted my a field of large houses. I was unsure how to proceed, especially with the sun on the rise. I checked my HUD and realized that I should probably be worried about eating instead of getting some nice shiny guns. I started to scout around the village of buildings, running from rock to rock to avoid detection, unsure if there was anyone in any of the buildings. The Helicopter seemed to appear right above me. I was jumping along, enjoying the desert, then all hell broke loose. The Chopper started firing at me relentlessly so i forgot about the possibly occupied buildings and ran for my life. I jumped off a small outcropping of rocks and landed directly on a cactus... So now I'm bleeding, running from a chopper and a notification pops up to tell me that I'm starving. 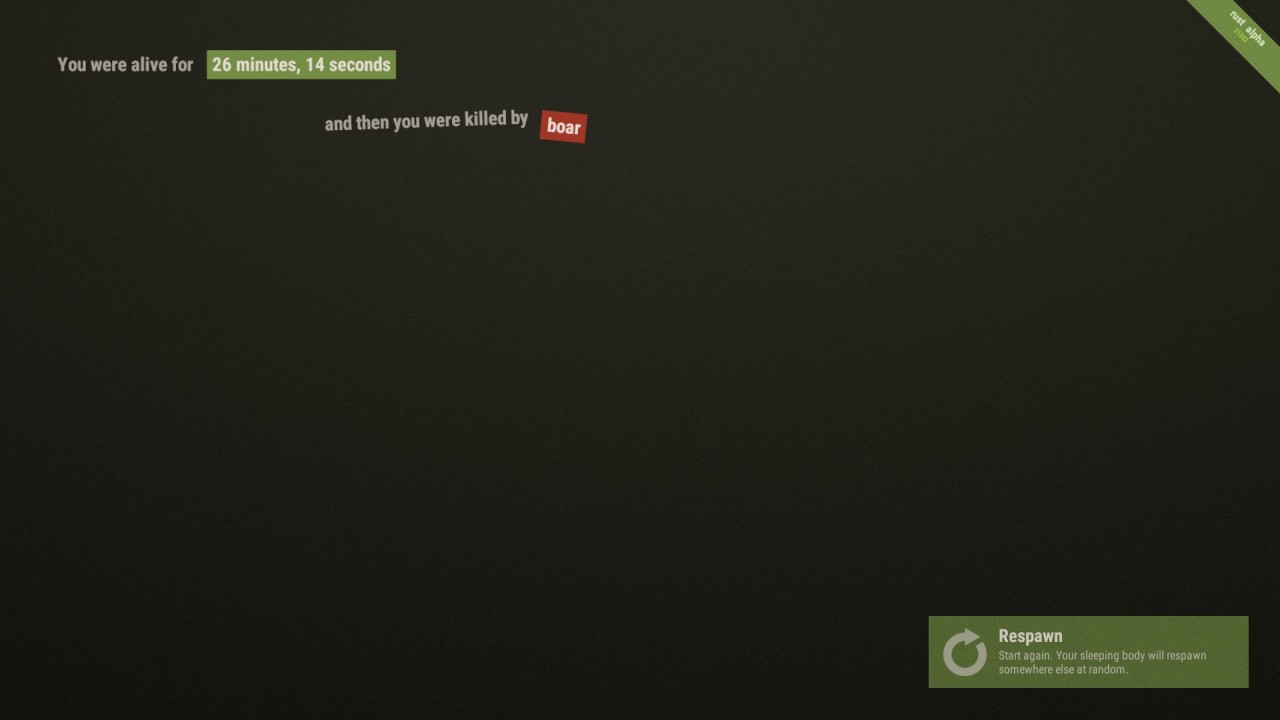 100 Play
Somehow I avoided the chopper and in my desperation to get some food, i smashed a boar with a rock. Already wounded from my run in with the cactus, the boar made short work of me and left me in a pool of my own blood. Life isn't off to a good start.

Overall, I find Rust to be one of those games that requires dedication, especially when playing on an official server. Everything takes a decent amount of time and this isn't a game for the casual gamer. Before this particular play through, I have clocked up 66 hours and it was all blood, sweat and tears to get a decent 'impenetrable' house going and be geared enough to take on the hotspots for greater loot. I would suggest finding a group of like minded friends to play it with as its hard going on your own. Anyone who enjoys Hardcore Survival games will get a kick out playing Rust and the countless hours that could be put into it. I must make a point of saying that this game is not complete and still in Alpha and I look forward to the complete game!
1631 0 Share
5.0 (1)